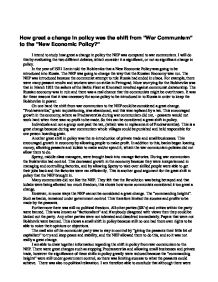 How great a change in policy was the shift from "War Communism" to the "New Economic Policy?" I intend to study how great a change in policy the NEP was compared to war communism. I will do this by evaluating the two different debates, which consider it a significant, or not so significant change in policy. In the year of 1921 Lenin told the Bolsheviks that a New Economic Policy was going to be introduced into Russia. The NEP was going to change the way that the Russian Economy was run. The NEP was introduced because the communist attempt to rule Russia had ended in chaos. For example, there were many peasant revolts and workers went on strike in Petrograd. More worrying for the Bolsheviks was that in March 1921 the sailors of the Baltic Fleet at Kronstadt revolted against communist dictatorship. ...read more.

Another great shift in policy was the re-introduction of private trade and small businesses. This encouraged growth in economy by allowing people to make profit. In addition to this, banks began loaning money, allowing peasants and kulaks to make and/or spend it, which the war communism policies did not allow them to do. Spetsy, middle class managers, were brought back into manage factories. During war communism the Bolsheviks had control. This decreased growth in the economy because they were inexperienced in managing and controlling factories, and by allowing Spetsy to take over skilled people were able to get their jobs back and the factories were ran efficiently. This is another good argument for the great shift in policy that the NEP brought in. Many communists did not like the NEP. ...read more.

I am able to draw together information regarding the shift in policy from war communism to the NEP. There were great changes such as stopping Prodrasverstka and allowing small businesses and private trade, however the significance of these shifts in policy greatly were reduced because the "commanding heights" were still under government control, so there was limiting success to what the peasants could achieve. There was also no political relaxation. I am therefore able to conclude that although there were some significant changes made, it was not as great as it first appears. There was simply a relaxation of Communist control in some areas of the system, which most Bolsheviks did not approve of and simply saw it as a short-term method to keep in control of Russia, before they had the opportunity to introduce full-blown communism into the society. ...read more.