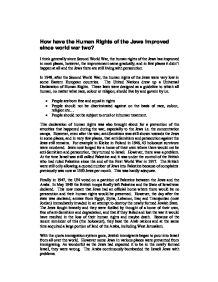 How Have the Human Rights of the Jews Improved Since World War Two?

How have the Human Rights of the Jews improved since world war two? I think generally since Second World War, the human rights of the Jews has improved in most places, however, the improvement came gradually, and in few places it didn't happen at all and the Jews there are still living with persecution. In 1948, after the Second World War, the human rights of the Jews were very low in some Eastern European countries. The United Nations drew up a Universal Declaration of Human Rights. These laws were designed as a guideline to which all human, no matter what race, colour or religion, should live by and govern by i.e. * People are born free and equal in rights * People should not be discriminated against on the basis of race, colour, religion etc... * People should not be subject to cruel or inhuman treatment. This declaration of human rights was also brought about for a prevention of the atrocities that happened during the war, especially to the Jews i.e. ...read more.

Because of the recent reminder of this (the holocaust), they beat the Arab nations and at the same time acquired a large portion of land of the Arabs, including West Jerusalem. With the quota immigration system gone, Jewish immigrants began to pour into Israel from all over the world. However some Jews in various places were prevented from immigrating. As wonderful as the Jews had expected it to be in the newly formed Israel, they were wrong. The Arabs continuously bombarded the Israeli Jews with problems. Israel was a main protagonist to a series of rescue campaigns aimed at bringing persecuted Jews to Israel from countries, which did not allow exit. For example, Israel organised a series of operations to evacuate Jews from Yemen, Iraq and Iran. In Yemen the Jews were persecuted and denied their human rights, and they were constant victims to pogroms afflicted by the Muslims. In Iraq the Jewish community also fell victim to pogroms from pro nazi groups led by a man called Rashid Ali, and they were in desperate need for help. ...read more.

This gave hope to other Russian Jews. Whilst Eastern European Jews were suffering, the Western European Jews had a long enjoyed a period of religious and racial freedom and the preservation of their human rights. When communism fell in Russia around 1988 and a lot of Jews immigrated to Israel, the attitude to Jews in other communist countries changed, and they were allowed to emigrate. After Israel overcame its major wars, it could concentrate on keeping the human rights of its occupants, the Jews, and their human rights could not have been properly kept if there was no state of Israel. However in some places, anti-Semitism still occurs and so does persecution, even in places in Western Europe. For example, there was an article published in a London Jewish paper in 1999, called 'The Jewish Chronicle' that said: "A sharp rise in the number of anti-Semitic attacks - including physical assaults - has been recorded in the past three months by Anglo-Jewish defence officials". This shows that anti-Semitism still exists, more strongly in some places than others, although it is nowhere near as strong or as bad and frequent as that before the Second World War. ...read more.