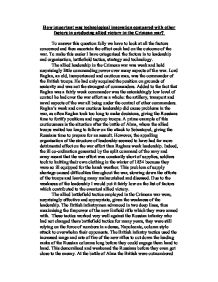 How important was technological innovation compared with other factors in producing allied victory in the Crimean war?

How important was technological innovation compared with other factors in producing allied victory in the Crimean war? To answer this question fully we have to look at all the factors concerned and then ascertain the effect each had on the outcome of the war. To make this easier I have categorised the factors in to leadership and organisation, battlefield tactics, strategy and technology. The allied leadership in the Crimean war was weak and held surprisingly little commanding power over many aspects of the war. Lord Raglan, an old, inexperienced and cautious man, was the commander of the British troops. He had only acquired the position on grounds of seniority and was not the strongest of commanders. Added to the fact that Raglan was a fairly weak commander was the astonishingly low level of control he had over the war effort as a whole: the artillery, transport and naval aspects of the war all being under the control of other commanders. Raglan's weak and over cautious leadership did cause problems in the war, as often Raglan took too long to make decisions, giving the Russians time to fortify positions and regroup troops. A prime example of this cautiousness is the situation after the battle of Alma, where the allied troops waited too long to follow on the attack to Sebastopol, giving the Russians time to prepare for an assault. ...read more.

Another tactical advantage the British had in the Crimean war was the level of training of its troops. They were seasoned professionals who had been disciplined and trained to the highest level, this meant that they were much more efficient on the battlefield, using their weapons well and rarely if ever, backing down and fleeing. At the battle of Alma a ludicrously thin line of the Highland Brigade was faced by hordes of Russian, superbly disciplined the Highland Brigade advanced firing; at the time an extremely difficult manoeuvre, this was too much for the Russian troops who were forced to retreat. The heroic failure of the charge of the Light brigade also serves to show just how disciplined and committed the British soldiers were, willing to charge in to an almost certain death if ordered to. The use of effective battlefield tactics that utilised the technological advances of the time in the appropriate manner was a fairly important factor in the eventual victory of the allies, since it often gave them the upper hand in close battles. However it is important to remember that these tactics relied on the technological advantages that the allies had over the relatively primitive weapon systems of the Russian army. ...read more.

All these new features of the weapons, combined with the aforementioned expertise of the soldiers handling them, meant that the allied troops had a huge advantage over the Russians on every battlefield in the Crimea. At Balaclava for example the 93rd highlanders were deployed only in a 'thin red line' but they still managed to defeat a Russian cavalry attack with their superior firepower. This demonstrated that the infantrymen now were so well armed that they could defeat a head on cavalry attack, once the strongest form of assault. Other technological improvements such as the telegraph were being used, which meant that communication was much quicker, allowing better organisation and positioning of troops. However the Enfield rifle was the most significant technological advancement and had the biggest effect on the outcome of the Crimean war. In conclusion it seems that the advance in weaponry was the most significant factor in the allied victory of the Crimean war. However we need to acknowledge that battlefield tactics were almost equally important: without the high quality of troops and the tactics to use these weapons effectively the British may not have had such an advantage over the enemy on the field of battle. With such sophisticated weaponry being put to such skilled use it was very difficult for the Russians to get the upper hand in battle ...read more.