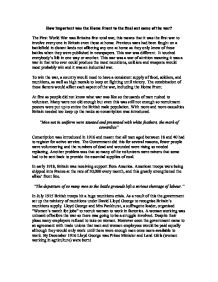 How important was the Home Front to the final out come of the war?

How important was the Home Front to the final out come of the war? The First World War was Britains first total war, this means that it was the first war to involve every one in Britain even those at home. Previous wars had been fought on a battlefield in distant lands not affecting any one at home as they only knew of these battles when they were published in newspapers. This war was different. It touched everybody's life in one way or another. This war was a war of attrition meaning it was a war in that who ever could produce the most munitions, soldiers and weapons would most probably win and it was an industrial war. To win the war, a country would need to have a consistent supply of food, soldiers, and munitions, as well as high morale to keep on fighting until victory. The combination of these factors would affect each aspect of the war, including the Home Front. At first as people did not know what war was like so thousands of men rushed to volunteer. Many were not old enough but even this was still not enough so recruitment posters were put up to entice the British male population. With more and more casualties Britain needed too keep up the ranks so conscription was introduced. ...read more.

Prices had shot up in Britain hitting the poorer people harder. Food became a luxury and expensive. "21 January 1918 The Times reported: The queues at Smithfield, around those butchers who do retail trade, were very large. At 11 o'clock the queue consisted of 4,000 people." In May 1917 voluntary rationing was introduced and standards were set b the Royal family. They claimed that they would reduce their consumption of bread by one quarter and use reduced amounts of flour in recipes. The government introduced the "Ninepenny Loaf" and issued cookery books with recipes using less flour. However none of these methods were effective enough. The system of compulsory rationing first came about in early 1918. This restricted sales per person of sugar, butter, meat and beer. The government issued ration books to every body. They contained coupons, which were handed over, every time they bought their ration. Breaches of the rationing order were dealt with severely. Court Date Nature of Offence Result HENDON / 29th Aug, 1918 / Unlawfully obtaining & using ration books / 3 months imprisonment WEST HAM / 29th Aug. 1918 / Being a retailer & failing to detach proper no. of forms /Fined �20 SMETHWICK / 22nd July 1918 / Obtaining meat in excess quantities / Fined �50 & �5 5s. Costs OLD STREET /4th Sept, 1918/Being a retailer selling to an unregistered customer/Fined �50 & �5 5s. ...read more.

Though at first it was a struggle for woman to work the government realised that as munitions were so low they needed to open factories just for ammunition production by female employee's. Then land girls come about, women whom worked in agriculture, and other such jobs. As a result of this a series women's rights evolved. This kept people busy and boosted morale as everybody thought that they were contributing to the war effort. By 1917 food supplies became quite desperate so with the help of DORA new measures were inflicted. At first there was voluntary rationing but this did not seem to help matters much so compulsory rationing was introduced. This meant that every body got their fair share of food keeping everybody happy and let the government worry about other things. To win this war of attrition it was vital that people wanted to continue fighting and win the war so morale played a mammoth part on the rocky road to victory. Maybe if Germanys Home Front had been more efficient then it could have led them to victory. Without the help of the Home Front then it is almost certain that Britain would have lost the war. The support from the Home Front meant that Britain could support the Western Front so we could keep on fighting until victory. "The Home Front had come to be as important as the Front under fire." ...read more.