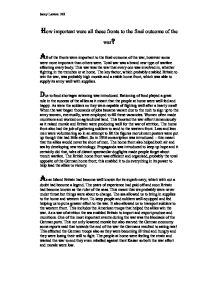 How important were all these fronts to the final outcome of the war.

How important were all these fronts to the final outcome of the war? All of the fronts were important to the final outcome of the war, however some were more important than others were. Total war was a brand new type of warfare effecting every body. This war was the war that every one was involved in, whether fighting in the trenches or at home. The key factor, which probably enabled Britain to win the war, was probably high morale and a stable home front, which was able to supply its army well with supplies. Due to food shortages rationing was introduced. Rationing of food played a great role in the success of the allies as it meant that the people at home were well fed and happy. As were the soldiers so they were capable of fighting well after a hearty meal! When the war began thousands of jobs became vacant due to the rush to sign up to the army women, eventually, were employed to fill these vacancies. Women often made munitions and worked on agricultural land. ...read more.

The sea allowed us to bring in supplies to the home and western front. To keep people and soldiers well equipped and fed helping us to put a greater effort to the war. It also allowed us to transport soldiers to the western front. This includes the American troops that helped the allies win the war. As a war of attrition the sea enabled Britain to import and export produce and munitions. One of the most important events during the war was the blockade of the German ports. This not only lowered morale but also starved the German economy some reports said that towards the end of the war the Germans resulted to eating rats! This effected the German troops also as they were becoming ill tired and hungry and they were losing their will to fight. The people at home were feeling the strain and wanted the war to end they even rebelled against their Kaiser so both the war effort and morale were low. The war in the air didn't really play such a great role in the war, although with out a doubt it helped. ...read more.

Maybe if Germanys home front had been more efficient then it could have led them to victory. Without the help of the home front then it is almost certain that the British fronts would have collapsed and subsequently Britain would have lost the war. The support from the home front meant that Britain could support the western front so we could keep on fighting until victory. The same thing would have eventually happened if Britain had lost control of the sea. As an Island Britain relies upon its navy for importing and exporting food, munitions and soldiers. So if it were no longer able to do these things it would surely starve and collapse just like Germany. One of the most important events during the war was probably the blockade of German ports, which starved them and their economy. So once again maybe if Germanys sea front had been more efficient then it could have led them to victory. The war in the air didn't really play a big role in the war, although with out a doubt it helped in terms of recognisance and morale boosting. Jenny Lawton 10H ...read more.