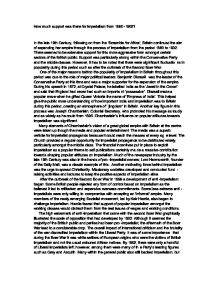 How much support was there for imperialism from 1880-1902? In the late 19th Century, following on from the 'Scramble for Africa', Britain continued the aim of expanding her empire through the process of imperialism from the period 1880 to 1902. There seemed to be extensive support for this more aggressive form amongst certain sectors of the British public. Support was particularly strong within the Conservative Party and the middle classes. However, it has to be noted that there were significant fluctuations in popularity during this period such as after the outbreak of the Second Boer War. One of the major reasons behind the popularity of imperialism in Britain throughout this period was due to the role of major political leaders. ...read more.

Many elements of Chamberlain's vision of a great global empire with Britain at the centre were taken up though the media and popular entertainment. The media was a superb vehicle for imperialist propaganda because it could reach the masses at every age level. The Church provided a regular opportunity for imperialist propaganda to be distributed widely, particularly amongst the middle class. The financial incentives put in place to exploit imperialism as a popular theme to sell publications certainly made a massive contribution towards shaping popular attitudes on imperialism. Much of the newspaper industry by the late 19th Century was also in the hands of pro-imperialist owners; Lord Harmsworth, founder of the Daily Mail, was a classic example of this. ...read more.

Although it seemed the majority of the British public and parties had been pro-imperialist, the aftermath of the Boer War lead to a considerable drop. The overall impact of international criticism and the brutality of the war discredited imperialism within the Liberal Party. It was of some importance that during the Boer War it was white settlers of European origins who were the victims of British imperialism and not the usual coloured African natives. By 1902, there were only a handful of Liberal imperialists left; however, among them were many of the Party's leading figures such as Grey and Asquith. Many within the general public also still backed imperialism, but the notion that there was universal support across all the social classes is misleading. Amongst the middle classes, imperialism was still intact, but the working class had other priorities that influenced their attitudes. ...read more.