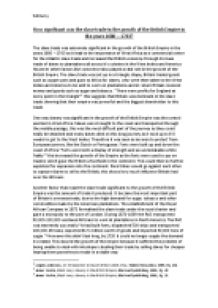 How significant was the slave trade in the growth of the British empire in the years 1680 1763?

On the other hand, British involvement expanded rapidly in response to the demand for labour to cultivate sugar in Barbados and other British West Indian islands. By the 1760s Britain was the foremost European country engaged in the Slave trade. The profits gained from chattel slavery helped to finance the industrial revolution and the Caribbean islands became the hub of the British Empire. The sugar colonies were Britain?s most valuable colonies. By the end of the eighteenth century, four million pounds came into Britain from the West Indian plantations. With the increased demand for slaves, large ships were travelling across the Atlantic to Africa in order to carry more slaves in a single roundtrip. This sparked a new age of ship architecture as new models with greater stability and reliance were being built. This gave more jobs to the British people, some started working on building ships to owning plantations. ?Around 1730, in Bristol it was estimated that on a fortunate voyage the profit on a cargo of about 270 slaves reached 7,000 pounds of 8,000?[4] Due to the growing necessity for slaves and as a result, the considerable decrease in the number of Africans to be enslaved, commercial farmers and planters were going out of their way to buy these slaves. ...read more.

This resulted in boosting the British economy which later they could invest in developing the empire. It wasn?t just work that was hard for the enslaved Africans. The white population on the islands was outnumbered by the black population, and they were frightened of rebellion. Therefore, punishment for any breaking of the rules was harsh. Rebellion was usually punished by death, often by a slow and painful method, to deter any others who thought of rising up against their owners. In conclusion, the slave trade was very significant in the growth of the British Empire as it provided a more efficient way of harvesting crops like sugar and tobacco, so that plantation owners could keep up with the high demand of commodities in Britain and Europe and earn a good profit. Through keeping up with this work load plantation owners had to maintain their plantation economies, unfortunately enslaved Africans would die easily so they had to buy new ones which helped the British economy because then more people would buy slaves from them. Moreover the slave trade gained the British more territory, which showed off their power and dominance over trade to the European countries. However other factors other than the slave trade helped in the growth of the British Empire such as commerce. But overall I believe the slave trade was one of the most significant things that developed the British Empire. ...read more.