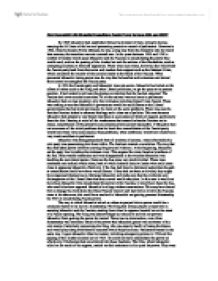 How Successfully did Mussolini Consolidate Fascist Power between 1922 and 1925?

How Successfully did Mussolini Consolidate Fascist Power between 1922 and 1925? By 1925 Mussolini had established himself as dictator of Italy, ruling by decree, carrying the full force of the law and possessing executive control of parliament. However in 1922, when he became Prime Minister, he was a long way from the dictatorial role he would later assume; the transition was not a smooth one. In the years between 1922 and 1925 a number of factors would assist Mussolini and the Fascists in consolidating the power they would need, such as the passing of the Acerbo law and the actions of the Blackshirts; such as corrupting elections to diminish opposition. There were also events, however, that would hold the Fascist party back from their aims and weaken their support such as the Matteoti Crisis, which concerned the murder of the socialist leader at the hands of the Fascists. What prevented Mussolini losing power was the way that he handled such situations and turned them around to strengthen the Fascist party. In 1922 the Fascist party and Mussolini were not secure. Mussolini had relied on the efforts of others such as the King and other Liberal politicians, to get the party to its present position. It had certainly not been the glorious revolution that the Ras had expected. The Fascists had never secured more than 7% of the national vote and once in parliament Mussolini had no clear majority; only four ministers including himself were Fascist. There was nothing to say that Mussolini's government would be any different to the Liberal governments that had ruled previously; he faced all the same problems. ...read more.

In fact he could have been responsible for its demise. Other interpretations of the situation suggest that Mussolini's stance in the years between 1922 and 1925 was successful in consolidating Fascist power. He was a fantastic public speaker and a very able politician. Many politicians made the mistake of thinking they could control Mussolini. A conservative newspaper of the time stated 'Once he is in Rome, he will be more subject to influence.' This would later prove to be a mistake. His early policies of reform and reaction were particularly popular. He was granted emergency powers in November 1922. The vast majority of the country were for this idea even Giolitti gave his backing 'The Cabinet must be supported.' At the beginning of his reign Italians were glad that Mussolini was acting decisively and consolidating his power. He invaded Corfu in August 1923 after four of his staff were assassinated in Greece. Although Britain demanded they withdrew later, the episode was regarded as a victory for 'glorious Fascism', making Mussolini look powerful and in control. The event was especially popular with the Nationalists who were glad that Italy was asserting herself as a power in Europe unlike the previous Liberal years. This prompted the Nationalists to join forces with the Fascists in announcing the invasion of Corfu as a success, another victory for Mussolini and his party. Their forces combined were more powerful and strengthened the party. He also gained support by dropping tax measures that had previously existed on the elite. Anything he did that gained support can only be seen as a success within the context of his consolidating Fascist power. ...read more.

By establishing the Grand Fascist Council in 1923 Mussolini was perhaps undermining the ability and credibility of the Ras but it still included Fascists and was rivalling parliament which was what the Ras wanted. In fact Mussolini was prepared to reverse his views for the sake of obtaining power. His programme in 1919 was anticlerical and in favour of taxing large businesses; by 1925 this had been reversed. His ideological aims however remained consistent. He always wanted the rebirth of a glorious Italy and for her to assert herself in Europe. Mussolini proved himself to be pragmatic but not devoid of a Fascist ideology. After examining the evidence, it is clear that Mussolini was successful in consolidating Fascist power in the years between 1922 and 1925. His first four years were ridden with problems and drawbacks: the divisions within his own party, the ongoing power and pressure of the Ras, the unclear ideology of Fascism for a political agenda and the way that he relied on everyone around him to deliver his power. Despite all these problems, he managed to achieve more successes than failures. He convinced parliament, from the outset, that he was worthy of emergency powers; strengthened the Fascist party by allowing the Nationalists to join them and commanded a majority nationally and in parliament. The over riding factor that would consolidate power and establish a dictatorship was that of the Matteoti crisis. If Mussolini had not had the support he had gained throughout the years, then Fascism would have failed in Italy. It was this, combined with Mussolini's personal skills as a politician, which allowed him to consolidate Fascist power in 1925. Lucy Cranshaw ...read more.