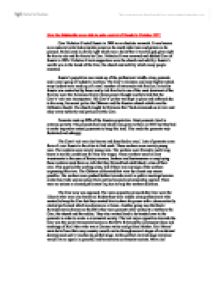 How the Bolsheviks were able to seize control of Russia in October 1917 Czar Nicholas II ruled Russia in 1900 as an absolute monarch. It was known as an autocrat as he had complete power so he could make laws and govern as he pleased. He believed in divine right which was a belief that it was his god given right for him to rule and for him to be Czar. Nicholas II was crowned and dubbed Czar of Russia in 1895. Nicholas II main supporters were the church and nobility. Russia's wealth was in the hands of the Czar, the church and nobility which many people resented. Russia's population was made up of the professional middle class, peasants and a small group of industrial workers. The Czar's ministers and most highly ranked army leaders were made up of a small number of extremely rich families. In reality Russia was controlled by these vastly rich families's one of the most dominant of the families were the Romanou family. Some people thought and believed that the Czar's' rule was incompetent. The Czar's' power was kept in place and enforced due to his army, his secret police the Okhrana and the Russian church which was the Orthodox church. The church taught its followers that 'God commands us to love and obey every authority and particularly the Czar. Peasants made up 80% of the Russian population. Most peasants lived in extreme poverty. The peasants had land which was given to them in 1861 but they had to make expensive annual payments to keep this land. ...read more.

The workers and peasants decided to stage a strike to protest against the Czars' incompetence, inadequacy and insubordination. The date of the protest was set for Sunday 22nd January 1905 it started out as a peaceful protest. There were about 200,000 protestors led by a priest named Father Gapon. The protestors made their way to the Czars' Winter Palace in Saint Petersburg which was the capital of Russia at that time. The protestors demanded a minimum wage, an 8 hour day and basic civil rights. When the Czars troops noticed the marching protestors they opened fire without any hesitation, remorse or warning. An estimated 200 people were massacred. The protest turn massacre became known as 'Bloody Sunday'. Consequences of Bloody Sunday varied from strikes and riots. To help the massacre terror and devastation blow over the Czar agreed to the October Manifesto which made him promise to share his power with an elected parliament which was known as a Duma. Whenever a Duma which had opposition towards the Czar was elected the Czar would dissolve them and would not let them work unless he was in complete control of them. In reality the Czar was not prepared to let any of his autocratic rule slip away. In 1914 Russia united with allies like Britain and America against Germany in the First World War. Although Russia was known as the 'Russian steamroller' which referred to its immense size they were not organised so due to this Archillies heal they suffered heavy, humiliating devastating defeats. ...read more.

with the plans complied by the Bolsheviks to seize power of Russia, Kerensky sends orders to his troops from the Provisional Government headquarters the Winter Palace to shut down Bolshevik newspapers in order to stop their ideals and influence to spread any feather but the Red Guards prevent this from happening. In the evening of the 24th Lenin goes to Smolny Institute the party headquarters'. On the 25th of October at 2:00am revolutionary troops take over Petrograd's (the capital city) bridges, railway stations, central post office and other City's strong points. At 3:30am revolutionary ships of the Baltic Fleet led by the cruiser Aurora arrive and aim guns on to the city. By 4:00 more important buildings like news agency's had been seized. At 10:00am Kerensky escapes and attempts to contact allies and loyal troops to defeat the Bolsheviks. Lenin and Trotsky approach the Petrograd Soviet and declare the end of the Provisional Government although it is still officially in power at this stage in the revolution, At 9:40pm the cruiser Aurora begging to fire blank shots aimed for the Winter Palace and the inhabiting troops abandonee the government. At 11:00 pm Peter and Paul Fortress stationed guns open fire on the Winter Palace. On the 26th of October in 1917 at 1:50am the Winter Palace is rushed by The Red Guard which was being defended by young Kadets and women's groups. Their were six fatalities during the attack. By the evening the Congress of Soviets elected a new government. In which Lenin is declared chairman. The Bolsheviks have now officially and successfully achieved power and control of Russia. ...read more.