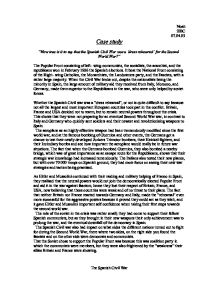 &quot;How true is it to say that the Spanish Civil War was a `dress rehearsal` for the Second World War?&quot;

Noah 2IBC 07.04.03 Case study "How true is it to say that the Spanish Civil War was a `dress rehearsal` for the Second World War?" The Popular Front consisting of left- wing-communists, the socialists, the anarchist, and the republicans won in February 1936 the Spanish elections. It beat the National Front consisting of the Right- wing Catholics, the Monarchists, the Landowners party, and the Fascists, with a rather large majority. When the Civil War broke out, despite the nationalists being the minority in Spain, the large amount of military aid they received from Italy, Morocco, and Germany, made them superior to the Republicans in the war, who were only helped by soviet forces. Whether the Spanish Civil war was a "dress rehearsal", or not is quite difficult to say because not all the largest and most important European countries took part in the conflict. ...read more.

The fact that when the Germans bombed Guernica, they also bombed a nearby bridge, which was of great importance as an escape route for the Republicans, shows that their strategic war knowledge had increased remendously. The Italians also tested their new planes, but with over 70 000 troops on Spanish ground, they had more focus on seeing their new war strategies and tactics being practised. As Hitler and Mussolini continued with their raiding and military helping of Franco in Spain, they realised that the neutral powers would not join the democratically elected Popular Front and aid it in the war against fascism, hence they lost their respect of Britain, France, and USA, now believing that these countries were weak and of no threat to their plans. ...read more.

Germany and Italy chose to ally with Franco to secure that communism wouldn't spread in Spain. Britain and France found themselves unable to choose sides and since they hoped that rearmament would not be necessary, they were not training for war, and stayed neutral during the crisis. It is true to say that the Spanish Civil war was a "dress rehearsal" for Germany, Italy, and the Soviet, because they could test their newest weapons and strategies. They were also able to analyse the British, French and American reactions. For Britain and France on the other hand it was not as much a testing of their weapons, but it made them realise that once again they were bound for war. The Spanish Civil War ...read more.