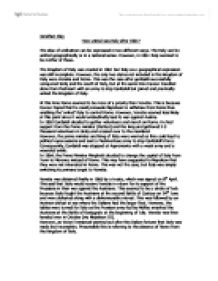 Jonathan Clay How united was Italy after 1861? The idea of unification can be expressed in two different ways. The Italy can be unified geographically or in a national sense. However, in 1861 Italy seemed to be neither of these. The kingdom of Italy was created in 1861 but Italy as a geographical expression was still incomplete. However, the only two states not included in the kingdom of Italy were Venetia and Rome. This was the case after garibaldi successfully conquered Sicily and the south of Italy, but at the same time Cavour travelled done from Piedmont with an army to stop Garibaldi but joined and practically united the kingdom of Italy. At this time Rome seemed to be more of a priority than Venetia. This is because Cavour hoped that he could persuade Napoleon to withdraw from Rome thus enabling the 'united' Italy to control Rome. However, Venetia seemed less likely at this point since it would undoubtedly lead to war against Austria. In 1862 Garibaldi decided to gather volunteers and march on Rome. He had support from the Prime minister (Rattazi) ...read more.

Venetia was then handed over in October (via Napoleon III). However, as Victor Emmanuel pointed out after this Italian fortune that Italy was made but incomplete. Presumably this is referring to the absence of Rome from the Kingdom of Italy. In the autumn of 1867 Garibaldi almost perpetuated his former actions with an unsuccessful attempt at seizing Rome. This was once again backed by Rattazzi until he distanced himself from the cause after worries over the political repercussions. Unfortunately for Garibaldi his force was once again stopped but by French and Papal forces. Three years later in 1870, Rome was owned by Italy. This was mainly due to the Franco-Prussian war, which took place after relations worsened between the two nations. At the beginning Victor Emmanuel took a neutral standpoint, but began to prepare troops after napoleon began withdrawing his troops in August. The defeat of the French at the Battle of Sedan on 2nd September caused the removal of the Emperor and the collapse of the Empire. Subsequently, 50,000 Italian troops invaded Rome and the Vatican; they outnumbered the 15,000 papal troops defending Rome. It was only on 20th September that Pius IX gave up to prevent bloodshed. ...read more.

The squabble between The North and the South of Italy was always inevitable. The North had more fertile soil and was far more prosperous economically than the South. Furthermore, the South was underrepresented in the Statuto that was naturally a Piedmontese institution. There was also a deep filled rivalry between the two parts of Italy that these stereotypes would simply be perpetuated in states of government (in terms of the North's opinion of the South). Italy required political and administrative centralisation if you were following utilitarianism. However, this seemed impractical since most of the nations wealth and population was in the North of Italy and so needed more representation. In truth Italy was unified as a geographical expression but each state previously had self-control and so even it became unified, Italy would still be a nation compiled from nations. As a result, it would always be difficult for Italy to become a national and political entity, as there would always be barriers of opinion according to region. However, the fact that Italy stayed as a single nation since shows that Italy was in the process of being unified. This proves that in this case geographical unity is far more instantaneous than national unity. ...read more.