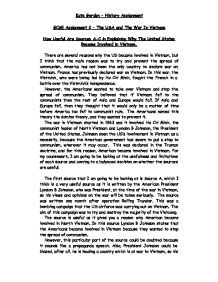 How Useful Are Sources A-C in Explaining Why The United States Became Involved in Vietnam.

GCSE Assignment 2 - The USA and The War In Vietnam How Useful Are Sources A-C in Explaining Why The United States Became Involved in Vietnam. There are several reasons why the US became involved in Vietnam, but I think that the main reason was to try and prevent the spread of communism. America has not been the only country to declare war on Vietnam. France has previously declared war on Vietnam. In this war, the Vietminh, who were being led by Ho Chi Minh, fought the French in a battle over the Vietminh's independence. However, the Americans wanted to take over Vietnam and stop the spread of communism. They believed that if Vietnam fell to the communists then the rest of Asia and Europe would fall. If Asia and Europe fell, then they thought that it would only be a matter of time before America too fell to communist rule. The Americans named this theory the domino theory, and they wanted to prevent it. The war in Vietnam started in 1963 and it involved Ho Chi Minh, the communist leader of North Vietnam and Lyndon B Johnson, the President of the United States. Johnson seen the US's involvement in Vietnam as a necessity, because the American government had sworn to put a stop to communism, wherever it may occur. ...read more.

In the source President Johnson states that American is fighting in Vietnam to try and make South Vietnam a free country. However, this might not have been the case. It is possible that American could be fighting in Vietnam because they want some involvement in the running of South Vietnam. Also, in the source, it seems as though President Johnson is trying to keep all the Americans happy, aiming the speech at both the Hawks and the Doves. (The Hawks were pro war and the Doves were anti - war). I think this was to combat the heavy protesting that was coming from both sides. The hawks were calling for the war to escalate whereas the doves were calling for the war to stop. Many of the protesters who were against the war were University students. This was mainly because the American Government had introduced conscription; so many students were being drafted into the war against their will. Overall, you can tell from the source that Lyndon B Johnson is trying to please the people of America, The Hawks, The Doves and The Christians by including themes in the speech that are relevant to these groups of people. The source also shows that he is very, much aware of the spread of communism and how the domino theory could eventually effect America, if it was not stopped. ...read more.

Professor Noam Chomnsky wrote this source in 1982, which make the source a secondary source, so it's reliability could be doubted because it was written after Vietnam and could be lacking important details. I don't think that this source is very reliable as it seems quite biased and it is littered with personal statements and opinions, which may not be necessarily. I also think that many of his statements and opinions are exaggerated and his comments are very opinionated and vague. I think that Professor Noam Chomnsky is exaggerating his statements to try and get people to believe in his own point of view, which gives me reason to doubt the source's reliability. On the other hand, the sources reliability could be used to a certain extent as the source could have the benefit of hindsight, so he would know all of the facts on Vietnam, which would help him give an informed opinion on Vietnam. Overall, I think that the source could be quite useful as it shows a very anti - American view on the war in Vietnam, whereas the other two sources were very much pro - American sources. So, in conclusion, I think that each of the sources reliability can be trusted to a certain extent, even though the three sources show very different approaches and opinions to the war in Vietnam. Kate Gordon - History Assignment ...read more.