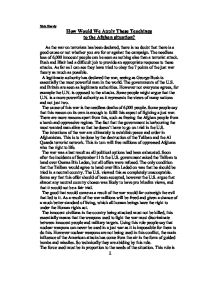 How Would We Apply These Teachings to the Afghan situation?

Nick Hardy How Would We Apply These Teachings to the Afghan situation? As the war on terrorism has been declared, there is no doubt that there is a good cause or not whether you are for or against the campaign. The needless loss of 6,000 innocent people can be seen as nothing else than a terrorist attack. Bush and Blair had a difficult job to provide an appropriate response to these attacks. As far as I can see they have tried to obey the 7 points of the just war theory as much as possible. A legitimate authority has declared the war, seeing as George Bush is essentially the most powerful man in the world. The governments of the U.S. and Britain are seen as legitimate authorities. However not everyone agrees, for example the U.N. is opposed to the attacks. Some people might argue that the U.N. is a more powerful authority as it represents the views of many nations and not just two. ...read more.

The innocent civilians in the country being attacked must not be killed, this essentially means that the weapons used to fight the war must discriminate between innocent people and military targets. Using this rule people say that nuclear weapons can never be used in a just war as it is impossible for them to do this. However nuclear weapons are not being used in this conflict, the main influence of the American attacks has come from the air in the form of guided bombs and missiles. So technically they are abiding by this rule. The force used must be in proportion to the needs of the situation. This rule is 1 probably the closest to being broken at this moment in time. The aerial bombing has undoubtedly killed more people than died in the World Trade Centre attacks. Also innocent Afghans have died who played no part in the attacks or even harbouring the terrorists. Pacifists say that all violence is wrong and should be condemned, this is because it goes against the Christian idea of love. ...read more.

Therefore you have to ask yourself is it the loving thing to do to hunt down and bring to justice those responsible for 6,000 murders. In my view this can only be seen as the right thing to do. However does the situation change when innocent Afghans are getting caught up in it? Most would argue that this changes nothing, as only a few will die from stray bombs, yet millions will be freed, so it is still the loving thing to do. All war goes against many of Jesus teaching in the New Testament. For example; Mark 9:50 "Live in peace with one another", John 14:17 "Peace is what I leave with you; it is my own peace that I give you." Mark 9:50 "Blessed are the peacemakers, for they shall be called the sons of God". And in Isaiah 9:6, the Messiah is described as "Prince of Peace". There are many more quotes like this in the bible, however it is seen that when God is confronted by a threat such as terrorism he can be very violent, an example of this is the deliverance from Egypt. 2 ...read more.