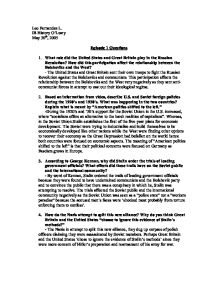 Leo Fernandez L. IB History O'Leary May 30th, 2005 Episode 1 Questions 1. What role did the United States and Great Britain play in the Russian Revolution? How did this participation affect the relationship between the Bolsheviks and the West? - The United States and Great Britain sent their own troops to fight the Russian Revolution against the Bolsheviks and communism. This participation effects the relationship between the Bolsheviks and the West very negatively as they sent anti-communist forces in attempt to cast out their ideological regime. 2. Based on information from video, describe U.S. and Soviet foreign policies during the 1920's and 1930's. What was happening in the two countries? Explain what is meant by "American politics shifted to the left." -During the 1920's and '30's support for the Soviet Union in the U.S. increased, where "socialism offers an alternative to the harsh realities of capitalism". ...read more.

The trials affected the Soviet public and the international community negatively as the Soviet Union was seen as a "police state" not a "workers paradise" because the accused men's faces were 'shocked most probably from torture enforcing them to confess'. 4. How do the Nazis attempt to split this new alliance? Why do you think Great Britain and the United States "choose to ignore this evidence of Stalin's methods?" - The Nazis in attempt to split this new alliance, they dug up corpses of polish officers claiming they were assassinated by Soviet members. Perhaps Great Britain and the United States 'chose to ignore the evidence of Stalin's methods' since they were more concern of Hitler's preparation and rearmament of his army for war. 5. At Tehran what do the Big Three decide to do with postwar Poland, Eastern Germany and the rest of Eastern Europe? ...read more.

Furthermore, defeat over the Nazi was drawing close and Soviet and U.S. troops met on the Elbe River in April 1945, eliminating Germany. 9. Why had the U.S. attitudes changed before the conference at Potsdam? What were U.S. concerns with regard to agreements made at Yalta? - The U.S. attitudes changed before the conference at Potsdam because agreements were not being followed as the Soviet Union were setting up regimes throughout Europe. The U.S. was concerned with the Soviet's claim over the attack on Japan and with Japan's delibrate attack on Pearl Harbor, the West were in a threatening position and wanted to have a counter attack on Japan. 10. How do you explain Stalin's reaction to Truman's statements regarding a "powerful new weapon"? - Stalin's reaction to Truman's statements regarding the "atomic bomb" was solely "ok" perhaps implying fear, intimidation of the West's powerful advantages and maybe Stalin understood that the West could attack Japan very severely more than the Soviets therefore he left it to them. ...read more.