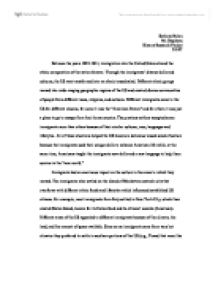 Immigrants Turn the United States into a mixture of ethnicity

Kathryn Bolen Mr. Stephens History Research Project 2/1/07 Between the years 1865-1914, immigration into the United States altered the ethnic composition of the nation forever. Through the immigrants' diverse skills and cultures, the US was transformed into an ethnic tossed salad. Different ethnic groups moved into wide-ranging geographic regions of the US and created diverse communities of people from different races, religions, and cultures. Different immigrants came to the US for different reasons; for some it was the "American Dream" and for others it was just a place to go to escape from their home country. The previous settlers accepted some immigrants more than others because of their similar cultures, race, languages and lifestyles. All of these situations helped the US become a delicious tossed salad of culture because the immigrants used their unique skills to enhance American life while, at the same time, Americans taught the immigrants new skills and a new language to help them survive in the "new world." Immigrants had an enormous impact on the culture in the areas to which they moved. ...read more.

One of the most important opportunities was the opportunity for their children to receive a free public education. In the schools, immigrant children learned English and skills they needed to integrate into mainstream America (american). Despite the hardship encountered by their parents, many families were able to achieve a better life for themselves as their children accepted responsibilities to care for the family's needs that would typically be handled by the adults. For example, because immigrants' children often mastered the English language more quickly than their parents, they handled important chores like shopping and completing forms for housing, health care, etc. Immigrants came to the US for the freedom to practice their religions, which was denied to them in countries outside the US (bergen). Until about 1845, the Roman Catholic population of the United States was a small minority of mostly English Catholics who were often quite socially prominent. But when several years of devastating potato famines led millions of Irish Catholics to flee to the United States in the mid-1840s, the face of American Catholicism began to change drastically and permanently. ...read more.

One way in which these prejudices were expressed was through the popular belief that the "new immigrants," coming as they did from despotic monarchies, were incapable of understanding democracy, living by it, or taking part in it. As the years went on the established Americans realized that the immigrants were helping the economy by working for lower wages and filling jobs many other people didn't want. Therefore, the tossed salad metaphor is an appropriate explanation for how the immigrants became a true part of the US. Although they had to over come some obstacles along the way, they were able to integrate into the US, and change the culture forever. Without the immigrants the US would be a country without any diversity in culture, religion, and lifestyle. The immigrants helped the US economy grow, which then helped the US become a more profitable country. If it weren't for the immigrants, many industries that grew and prospered in the 20th Century would have not been able to survive. The tossed salad metaphor explains how the immigrants helped the economy and diversity of the US. The immigrants were able to mix in with the Americans while keeping their own cultures alive. ...read more.