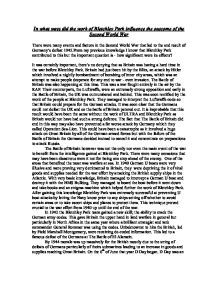 In what ways did the work of Bletchley Park influence the outcome of the Second World War.

In what ways did the work of Bletchley Park influence the outcome of the Second World War There were many events and factors in the Second World War that led to the end result of Germany's defeat 1945.From my previous knowledge I know that Bletchley Park contributed to this but the important question is - how significant were its effects? It was certainly important, there's no denying that as Britain was having a hard time in the war before Bletchley Park. Britain had just been hit by the Blitz, an attack by Hitler which involved a nightly bombardment of bombing of inner city areas, which was an attempt to make people desperate for any end to war - even invasion. The Battle of Britain was also happening at this time. This was a war fought entirely in the air by the RAF. Their counterparts, the Luftwaffe, were an extremely strong opposition and early in the Battle of Britain, the UK was outnumbered and behind. This was soon rectified by the work of the people at Bletchley Park. ...read more.

After gaining this knowledge Bletchley Park was extremely successful at preventing U boat attacks by letting the Navy know prior to any ships setting off whether to avoid certain areas or to take escort ships and planes to protect them. This technique proved crucial to the war effort from 1940 up until the end of the war. In 1942 the Bletchley Park team gained a new skill; the ability to crack the German army codes. This gave Britain the upper hand in land warfare in general but particularly in North Africa in the same year where a brilliant strategist and tank commander General Rommer was using the codes. Unbeknownst to him the British, led by Field Marshall Montgomery, were receiving de-coded information. This led to a famous defeat of the Germans at The Battle of El Alamein. By 1944 morale was up massively for the British mostly due to the string of defeats of Germans particularly of theirs submarines leading to an increase in goods and supplies reaching Great Britain. ...read more.

They did this without the help of Bletchley Park or any other interception form to gain intelligence. As well as the Soviet involvement in the war there were other events and battles unaffected by Bletchley Park such as the Involvement of the USA in the war due to the attack on them by the Japanese at Pearl Harbour, Hawaii. Many say that without the USA the allies would have been defeated so this factor alone could have been almost, if not equally as important to the defeat of Germany in 1945 as the research at Bletchley Park was. As well as the positive factors for the Allies, there were also failed plans and bad organisation on the part of the enemy such as the over expansion of the German forces which led to the failure to defeat the Soviet Union. In conclusion I think that Bletchley Park was a very important factor which contributed to the war ending with Germany's defeat in 1945 though there are many other factors, some equally important, that did not involve code breaking, which helped to do this too. ...read more.