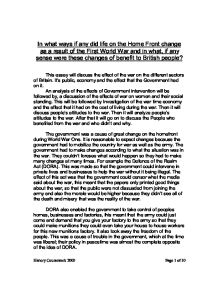 In What Ways If Any Did Life On the Home Front Change As a Result of the First World War and In What, If Any Sense Were These Changes of Benefit To British People?

In what ways if any did life on the Home Front change as a result of the First World War and in what, if any sense were these changes of benefit to British people? This essay will discuss the effect of the war on the different sectors of Britain. It's public, economy and the effect that the Government had on it. An analysis of the effects of Government intervention will be followed by, a discussion of the effects of war on women and their social standing. This will be followed by Investigation of the war time economy and the effect that it had on the cost of living during the war. Then it will discuss people's attitudes to the war. Then it will analyze people's attitudes to the war. After that it will go on to discuss the People who benefited from the war and who didn't and why. The government was a cause of great change on the homefront during World War One. It is reasonable to expect changes because the government had to mobilize the country for war as well as the army. The government had to make changes according to what the situation was in the war. They couldn't foresee what would happen so they had to make many changes at many times. For example the Defence of the Realm Act (DORA). This was made so that the government could intervene in private lives and businesses to help the war without it being illegal. The effect of this act was that the government could censor what the media said about the war, this meant that the papers only printed good things about the war, so that the public were not dissuaded from joining the army and also the morale would be higher because they didn't see all of the death and misery that was the reality of the war. DORA also enabled the government to take control of peoples homes, businesses and factories, this meant that the army could just ...read more.

This system of pay was brought in to entice people to do that job. It meant that if a worker put in more work and worked faster then he would end up being paid more than the skilled worker who had worked there longer and had more skill at doing the job. This upset the skilled workers and in 1916 due to the conscription act many of the skilled workers were called up to the army. This also caused a lot of unrest because they were told earlier on in the war that they were indispensable to the war effort on the homefront, but now that the unskilled workers had come in this meant that there were more of them doing the job and therefore some workers could go to war without it causing that much trouble to the production of the product that they were making. Another cause of unrest was dilution this was when the skilled workers had to work with unskilled men; women or children for generally more or less pay*. This is explained well in the last paragraph of source D13 which refers to the effect on labour relations as a cause of dilution during the war Due to this and the fact that they were working for less than the unskilled workers the skilled workers went on strike, in 1916 due to these strikes the economy lost 2.5 million working days. Certain sections of the economy were more affected by the war than others; firstly, agriculture switched its emphasis from pasture to arable. During wartime it was more sensible to farm crops which took up less space than animals one of the most popular crops to grow were potatoes, but pigs were also owned because they didn't need much space because they don't need to graze. Crop farming was more efficient if you used mechanical machinery such as tractors. ...read more.