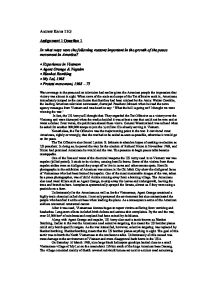 In what ways were the following reasons important in the growth of the peace movement in America?

Andrew Kerns 11G Assignment 1 Question 1 In what ways were the following reasons important in the growth of the peace movement in America? * Experience in Vietnam * Agent Orange & Napalm * Blanket Bombing * My Lai, 1968 * Protest movement, 1968 - 73 War coverage in the press and on television had earlier given the American people the impression that victory was almost in sight. When news of the scale and scope of the Tet offensive sank in, Americans immediately jumped to the conclusion that that they had been mislead by the Army. Walter Cronkite, the leading American television newscaster, dismayed President Johnson when he read the news agency messages from Vietnam and was heard to say: ' What the hell is going on? I thought we were winning the war.' In fact, the US Army still thought that. They regarded the Tet Offensive as a victory over the Vietcong and were dismayed when the media decided it was at best a war that could not be won and at worst a defeat. Even worse, the politicians shared these views. General Westmorland was refused when he asked for another 200,000 troops to join the 1/2 million GIs already serving in Vietnam. Nonetheless, the Tet Offensive was the major turning point in the war. It convinced most Americans, rightly or wrongly, that the war had to be ended as soon as possible, otherwise it would go on for years. ...read more.

The goal of this tactic was to bomb the North Vietnamese to the conference table. Unfortunately all this caused was more damage to the environment of Vietnam and more disapproval back home in the USA. On Saturday 16 March 1968, nine large black helicopter gunships landed close to a small Vietnamese village of My Lai on the coast about 120 km south of the huge American base Danang. The village consisted mainly of thatch covered red-brick houses set next to a minor road set among hedges, bamboo trees and a paddy field. About 700 inhabitants lived there at the time when the Americans came. Three platoons of American soldiers left the helicopters. They were part of a search and destroy mission codenamed Task Force Barker after its overall commander, Lt Colonel Frank Barker. The US Army had heard that the inhabitants of My Lai were Vietcong sympathisers. The American soldiers entered the village and killed over half of the inhabitants in cold blood. As you can expect when the news of what had happened got back to America, most Americans were horrified as the massacre made headline news. Many were so appalled they doubted whether it could be true. The people of America were not happy. The pressures of the war also effected the soldiers. Many soldiers began to take drugs to calm their nerves. ...read more.

It made people viewing at home realise what was being done to Vietnam in their name. Photographs in magazines and newspapers had a similar impact. Two images in particular affected the way people thought about, and later remembered, the war. One was a photograph showing screaming Vietnamese children after a napalm attack. The other showed the cold-blooded execution of a Vietcong officer in the street. Many photographs similar scenes like these two were shown to the American public, which gave the Americans more reason to continue their protests. US Army commanders and many officers and soldiers were dismayed that the media coverage of the war, and even blamed television and the press for weakening the American stance in Vietnam. It was the media however, not the US Army, which first exposed the scandal of the My Lai massacre eighteen months after it took place in 1968. There was little media coverage of the communist side. Reporters could not go on patrol with the NVA or Vietcong units to describe their failures and report on their war crimes. It was much easier to follow the Americans. The newsreel sequences screened in North Vietnam were very one-sided. They showed the world what Ho Chi Minh wanted them to see: ' a small nation bravely fighting against the might of America.' The protest continued in America up until 1973, when peace talks eventually began to take place in Paris up until 1975, when both powers decided to bring the Vietnam War to an end. ...read more.