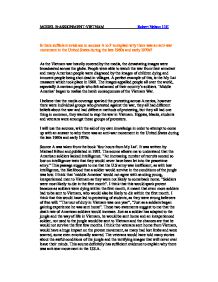 Is there sufficient evidence in sources A to F to explain why there was an anti-war movement in the United States during the late 1960s and early 1970s?

Source B, is a photograph of napalm victims during the Vietnam War. This source shows how extensive the media coverage was on the Vietnam war. This photograph shows child victims of napalm. These images were shocking to American people, they did not expect that innocent children would be the victims of chemical warfare. 'middle American' was under the impression that the war was being won, stooping so low to harm children changed many minds. I know that hippies were strongly opposed to the use of chemical and biological weapons. Therefore I would say that this source does explain the protest against the Vietnam War in America. Source C, was written by Richard Hamer, an American journalist. In his article, he speaks of the difficulty of fighting in the jungle. This source tells me many problems that the U.S soldiers faced. "You walk down a road between rice paddies. Vietnamese are in every paddy." The soldiers were always outsmarted by the tactics of the Vietcong, they were very intelligent and had a great advantage due to their knowledge of the terrain. "Should you kill all of them or none of them". This was a major problem for U.S soldiers, if there was a suspect Vietcong amongst a group of people they would be in a difficult position as their aim was to kill any Vietcong in sight. ...read more.

The horrific images would have been captured on camera and shown on television. American people would see the harsh reality of the war. The colour television really brings the war to life, people can witness events as if they were five yards away from it, which meant that the American government could no longer lie about the duties that American soldiers carried out. This caused 'middle America' to lose trust in the government and they just wanted the war to be stopped. This source provides sufficient evidence to explain why there was an anti-war protest in America. The images were seen by all different kinds of people throughout America and the images caused huge protest amongst many groups and 'middle America' From evaluating the sources, and using my own knowledge, I am able to conclude that they do not give sufficient evidence to explain why there was an anti-war movement in the United States during the late 1960s and early 1970s. The sources do not give enough information, they do not show how particular groups react to events. For example none of the sources mention how hippies reacted to the use of chemical weapons, or how black people protested about being sent to Vietnam. The sources do give some evidence to explain why there was protesting, however, there is definitely not sufficient evidence to explain the anti-war movement during this period. ...read more.