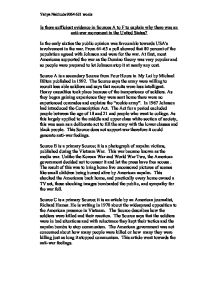 Is there sufficient evidence in Sources A to F to explain why there was an anti-war movement in the United States?

Is there sufficient evidence in Sources A to F to explain why there was an anti-war movement in the United States? In the early sixties the public opinion was favourable towards USA's involvement in the war. From 64-65 a poll showed that 80 percent of the population agreed with Johnson and were for the war. At first, most Americans supported the war as the Domino theory was very popular and so people were prepared to let Johnson stop it at nearly any cost. Source A is a secondary Source from Four Hours in My Lai by Michael Bilton published in 1992. The Source says the army were willing to recruit less able soldiers and says that recruits were less intelligent. ...read more.

This war became known as the media war. Unlike the Korean War and World War Two, the American government decided not to censor it and let the press have free access. The result of this was to bring home live uncensored pictures of scenes like small children being burned alive by American napalm. This shocked the Americans back home, and practically every home owned a TV set, these shocking images bombarded the public, and sympathy for the war fell. Source C is a primary Source; it is an article by an American journalist, Richard Hamer. He is writing in 1970 about the widespread opposition to the American presence in Vietnam. ...read more.

This did not help win support for the war. Source E is secondary Source, it says how the media, especially television portrays the. This would show why there was so much protesting as they had been. This was the first time that the media was against the war therefore it showed all the brutality. Also the media became a business and everyone wanted things bigger and better. The Source says that because of the media the Americans are becoming anti-war. In my opinion I think that one Source is not enough to explain why there was anti-war movement in the United States, but there is sufficient evidence for an anti-war movement in all of them. Yahya Nakhuda 9064 631 words ...read more.