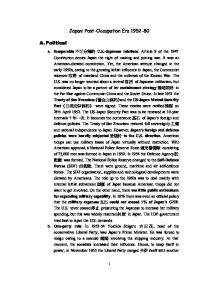 Japan: Post-Occupation Era 1952-80 A. Political a. Inseparable????? U.S.-Japanese relations: Article 9 of the 1947 Constitution denies Japan the right of making and joining war. It was an American-dictated constitution. Yet, the American attitude changed in the early 1950s, owing to the growing leftist influence in Japan, the Communist takeover?? of mainland China and the outbreak of the Korean War. The U.S. was no longer worried about a revival?? of Japanese militarism, but considered Japan to be a partner of her containment strategy???? in the Far East against Communist China and the Soviet Union. In late 1951 the Treaty of San Francisco�?????�and the US-Japan Mutual Security Pact�??????� were signed. These treaties were ratified?? on 28th April 1952. The US-Japan Security Pact was to be renewed at 10-year intervals????. It becomes the cornerstone?? of Japan's foreign and defence policies. The Treaty of San Francisco restored full sovereignty?? and national independence to Japan. However, Japan's foreign and defence policies were heavily subjected??? to the U.S. direction. American troops can use military bases of Japan virtually without restriction. With American approval, a National Police Reserve Force????? consisting of 75,000 men was formed in Japan in 1950. In 1954 the Defence Agency??? was formed. The National Police Reserve changed to the Self-Defence Forces (SDF) ???. There were ground, maritime and air self-defence forces. The SDF organization, supplies and technological developments were dictated by Americans. The role up to the 1960s was to deal mainly with internal leftist subversion?? ...read more.

There was still no widespread questioning of social, religious and political authority??. Traditional virtues?? like loyalty and obedience still exists in many sectors of society. f. Life-long employment???? still prevailed?? in most enterprises. g. Pacifism???? prevails. Military men received low social esteem??. Their self-image was extremely low. Despite high salaries, the SDF usually found it hard to get enough recruits??. There were also usual legal disputes over whether or not the SDF is constitutional????, because Article 9 of the 1947 Constitution states clearly that "the Japanese people forever renounce?? war as a sovereign right of the nation ...... land, sea and air forces as well as other war potential will never be maintained. The right of belligerency??? of the state will not be recognized". C. Cultural a. The emperor-state orthodoxy???????????? was destroyed. The SCAP (Supreme Commander of the Allied Powers??????) had denied the divinity?? of the Emperor. The 1947 Constitution further reduces the Emperor to nothing more than a figurehead????. The myth??of the Emperor continued to decline. Though most Japanese still respect the Emperor and deem?? him one of the national essence??, yet the Emperor has no appeal at all to the younger generation. b. Fine art was marked by great creativity???. Moreover, Japanese cartoons, films and pop singers are very popular both at home and abroad. American influence is strong in influencing Japan's postwar cultural developments. c. Individualism????continued to be a conscious goal among students and younger Japanese. ...read more.

of China. The KMT and CCP?? governments relinquished??the claim to the reparations respectively. Though Taiwan was of great strategic (Taiwan is located on the oil supply route between Japan and Southeast Asian countries) and economic importance to Japan, yet the political influence of the huge, populous???? and nuclear-armed mainland China was never negligible??. Since the Sino-Soviet border clash?? at Zhenbaodao??? of 1969 the U.S. started to consider Communist China to be an important partner against the Soviet Union. In 1971 the People's Republic of China was admitted?? to the U.N. President Nixon??? even announced his official visit to Beijing. With American implicit approval??, Japan approached to Communist China. m. In 1973 the US returned Okinawa?? to Japan. Henceforth??, the issue of Diaoyutai???causes quarrels between Japan and the two regimes of China. n. Since 1964 Japan had became the dominant??? trade partner of all East Asia, and provided almost one-third of total foreign capital for the region, compared to 23% by the U.S. By 1973 Japanese economic aid?? to other countries came just next to the U.S. Japan played the leading role in the Asian Development Bank??????. o. However, by 1972 only 10% of all her aid consisted of genuine??? aid like grants??, technical assistance and contributions??. Most aid was tied to the procurement?? of Japanese goods and services. p. The ASEAN (Association of South East Asian Nations???????) was set up in 1967, but Japan did not value?? its importance until 1977. The ASEAN used to criticize Japan's insufficient and dishonest economic aid. 1 ...read more.