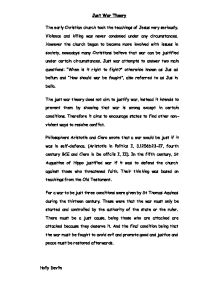 The early Christian church took the teachings of Jesus very seriously. Violence and killing was never condoned under any circumstances. However the church began to become more involved with issues in society, nowadays many Christians believe that war can be justified under certain circumstances. Just war attempts to answer two main questions: "When is it right to fight?" otherwise known as Jus ad bellum and "How should war be fought", also referred to as Jus in bello. The just war theory does not aim to justify war, instead it intends to prevent them by showing that war is wrong except in certain conditions. Therefore it aims to encourage states to find other non-violent ways to resolve conflict. ...read more.

Francisco Suarez and Francisco de Vitoria later added three final conditions. It was understood that the war must be the last result; all non-violent options must be exhausted before the use of force can be justified, and there must be "proportionality" and a chance of success. Proportionality can be understood in Aquinas' understanding of a "just war". He argued that warring activity should be proportionate to the hostility made and not excessive to that hostility. Many people have criticised the Just War Theory. In theory the just war conditions seem acceptable but in practice this is not the case. The 'just war theory' has never been successfully employed therefore it suggests that the conditions are not suitable in war or that there is no way that they can be followed to make a war fully justified. ...read more.

It is not possible to determine the outcome in any war, yet one of the conditions states that war should only go ahead if good will result in the end therefore how is it ever justifiable to enter a war following this conditions when there is no way of predicting the future? It is very difficult to select who is and who is not a combatant. It could be considered that just those who fight in the war are combatants but what about those who make uniforms for the soldiers or those who make food to feed them, are they also combatants? It is not easy to define who is the 'innocent'. The criticisms to the just war theory seem to be much stronger than its strengths. Just War Theory Holly Devlin ...read more.