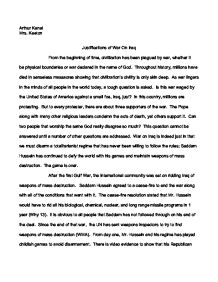 Justifications of War On Iraq.

Arthur Kanai Mrs. Keeton Justifications of War On Iraq From the beginning of time, civilization has been plagued by war, whether it be physical boundaries or war declared in the name of God. Throughout history, millions have died in senseless massacres showing that civilization's civility is only skin deep. As war lingers in the minds of all people in the world today, a tough question is asked. Is this war waged by the United States of America against a small foe, Iraq, just? In this country, millions are protesting. But to every protester, there are about three supporters of the war. The Pope along with many other religious leaders condemn the acts of death, yet others support it. Can two people that worship the same God really disagree so much? This question cannot be answered until a number of other questions are addressed. War on Iraq is indeed just in that we must disarm a totalitarianist regime that has never been willing to follow the rules; Saddam Hussein has continued to defy the world with his games and maintain weapons of mass destruction. The game is over. After the first Gulf War, the international community was set on ridding Iraq of weapons of mass destruction. ...read more.

It is obvious now that Saddam Hussein has not been complying. The very missiles he claimed not to have has been deployed to Kuwait in order to attack coalition troops there. Clearly, the dictator is in material breach of the resolution, then why aren't the very countries that signed the resolution in defiance of the United States? France has been the head of the beast, leading the way in public humiliation toward the US (Full speed ahead 27). For the first time since 1956, the French Foreign Minister to the UN has vowed to use their power to veto to prevent any attack against Iraq (27). Public disgust for the French has never been denied in the States, but it has become a lot worse (L'Europe, C'est Moi 46). There has been an outcry by US politician to boycott French goods, and to change the names of products associated with the name "French." Yet global views of the US has not lightened either. America in the past few months have been a target of protests in massive proportions. They have been the "largest antiwar rallies ever seen in Europe (28)." Why has America's oldest ally, dating back to the revolutionary war, decided to turn their backs on us? ...read more.

Yet our global interests are not global domination, history has shown that. What this war is about is the disarmament of an evil dictator, and the liberation of his people. Saddam Hussein kills, imprisons, executes, and tortures his people. "5,000 deaths a month of children below the age of five (Why 13)." That is only the children. After the first Gulf War, he slaughtered thousands of opposition forces. He's used chemical weapons against our military and his own people. He is Hitler in the flesh. There is no denying his ambition to take over countries, and to kill anyone who stands in his way. War with Iraq is necessary. We must not be hesitant in going to war with them. We cannot let innocent people die at the hands of a tyrant and look the other way. He has repeatedly defied the world with games. But death is no game. And if he wants to play a game, the game is over. 360,000 children under the age of five died since the first Gulf War. That number does not include the hundreds of thousands he has mass murdered. War against Hitler was widely supported here either, but looking back in history, we know it was the right thing to liberate the Jews. This war is not simply killing more people. It is the act of liberating a people in need of desperate help. ...read more.