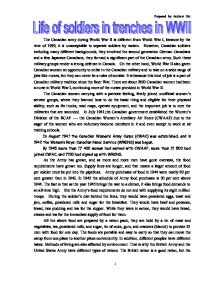 Life of soldiers in trenches in WWII.

The Canadian army during World War II is different from World War I, because by the time of 1939, it is unacceptable to separate soldiers by racism. However, Canadian soldiers including many different backgrounds, they involved the second generation German Canadians and a few Japanese Canadians, they formed a significant part of the Canadian army. Such these military groups render a strong defense in Canada. On the other hand, World War II also given Canadian women an opportunity to enlist in the Canadian military and to take on a wide range of jobs like nurses, but they can never be a roles of combat. It is because this kind of job is a part of Canadian military tradition since the Boer War. There are about 2800 Canadian women had been a nurse in World War I, continuing more of the nurses provided in World War II. The Canadian women carrying with a patriotic feeling, firstly joined unofficial women's service groups, where they learned how to do the basic thing and eligible for their physical ability; such as fix trucks, read maps, operate equipment, and the important job is to cure the militaries that are wounded. In July 1941,the Canadian government established the Women's Division of the RCAF ---- the Canadian Women's Auxiliary Air Force (CWAAF) ...read more.

Furthermore, the American is a heavy meat-eater. For the shoes, shoes are really important in a warfare, because soldiers had to stand up under hard marching, mud, snow, and the various of the weather. Warfare requires a lot of shoes, and it requires strong shoes that will not be broke easily. Soldiers are taught how to keep the shoes for a long time. Mobile repair shops move up behind the fighting fronts. Facilities for completely rebuilding shoes have been set up both in Canada and overseas. As the Army grew to its present strength of 8,300,000 men, the requirements for shoe leather grew, too. As more men went overseas, living and fighting under the harsh conditions of combat areas, Army requirements rose again. As we began re-organized for the one-front war, more than 5,000,000 men were overseas. Canadian Navy considered the battle for the Atlantic won on May 24, 1943. They involved 3000 men and 11 fighting ships. During the bad weather, the soldiers had to fight the difficulties like the messy decks inside the corvette. Into two compartments about 10 m by 6.7 m at their greatest dimensions, fully fill with some sixty-odd men, each has for his living space ---- eating, sleeping and relaxing. The new soldier wears new clothes in a new way and they fit. ...read more.

The defense forces on the Chinese mainland were not powerful enough to resist the Japanese attack. On December 18, 1941, thousands of Japanese troops began crossing the strait to Hong Kong Island and even captured it. When the invasion ended, every Canadian soldier in Hong Kong had either been killed or captured by the Japanese. For the war, like on the Dieppe on August 19,1942. The Canadian troops raid on a French port to attack Germans at Dieppe accompanied with British and American troops. As a result, due to the Canadians were lack of experience, it leads to almost have 1000 died, 2000 taken prisoner and more than 500 were wounded. All in all, the desired characteristics of a field ration are that: (1) It should be a completely balanced ration containing sufficient nutrient. (2) It should be palatable in accordance with the eating habits of the troops, so that it may be generally acceptable. (3) It should be transported without undue difficulty. (4) Its components should have keeping quality, so that depots in the theatres of operation can keep on hand sufficient stocks to supply the troops for a predetermined length of time. Methods of use should be readily understandable. (5) Bulk and weight should be reduced as far as possible to permit simple and ease of transport. Too often the requirements relative to bulk and weight overbalanced other desirable qualities. Prepared by Andrew Hui 1 ...read more.