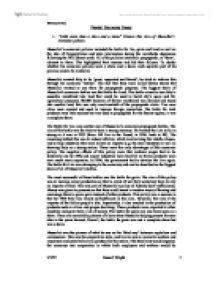 &quot;Little more than a show and a sham&quot; Discuss this view of Mussolini's economic policies.

* "Little more than a show and a sham" Discuss this view of Mussolini's economic policies. Mussolini's economic policies included the battle for lire, grain and land as well as the idea of Corporativism and state intervention during the worldwide depression following the Wall Street crash. All of his policies involved a propaganda, or 'show', element to them. This highlighted their success and hid their failures. To decide whether his economic policies were a show and a sham, each separate part of his policies need to be looked at. Mussolini wanted Italy to be 'great, respected and feared'; he tried to achieve this through his economic 'battles'. The fact that they were called battles shows that Mussolini wanted to use them for propaganda purposes. The biggest show of Mussolini's economic battles was the Battle for Land. This battle aimed to turn Italy's unusable marshland into land that could be used to build city's upon and for agricultural purposes. 80,000 hectares of former marshland was drained and tuned into useable land, this was only one-twentieth of the propaganda claim. ...read more.

Importantly, it also resulted in the production of products such as olives and grapes declining. These products were exported to other countries and gave Italy a lot of money. The battle for grain can also been seen as a show. There are memorable pictures of a bare chest Mussolini helping present farmers take in the years harvest. Overall, the battle for grain was not a complete sham but was a show. Mussolini was the pioneer of what he saw as the 'third way' between capitalism and communism. This was the corporative state, and its aim was to reconcile workers and employers and unite Italian's to produce for the nation. This third way would organise the economy into corporation in which both employers and workers would be represented. Businesses would not be owned by the state, like they would be in a communist state, and they would not be completely free, like they would be in a true capitalist state. Instead they would be left in private hands but would be regulated by corporations in order to ensure that production was directed in the national interest. ...read more.

The government's actions to survive the great depression mean that not all of Mussolini's economic policies were a show and a sham. In conclusion, Mussolini's economic policies were essentially a show and a sham engineered to ensure the regime's support. The battle for land produced few results but was billed as success on an international level. The battle for lira made the country look strong whilst it actually weakened it and resulted in wage cuts. The corporative state did little for the countries workers and was not effective at helping the nations interests. Despite these failures there were two successes. The main one is the government's dealing with the worldwide depression. Their intervention prevented the levels of mass unemployment and recession that were seen in other Western European countries. To a lesser extent, the battle for grain was a success as by 1940 the country was almost self sufficient in this area. Even with these two successes it must be remembered that the countries national debt before the war was over 150 billion lire. With this taken into account it is reasonable to say that Mussolini's economic policies were a show and a sham. History (NAJ) Fascist Economy Essay 3/7/07 Russell Wright 1 ...read more.