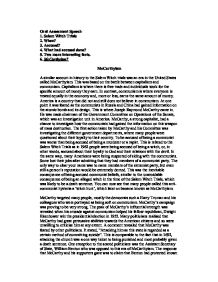 McCarthyism. A similar account in history to the Salem Witch trials was an era in the United States called McCarthyism.

Oral Assessment Speech 1. Salem Witch Trials 2. When? 3. Accused? 4. What had accused done? 5. Two more interesting facts. 6. McCarthyism? McCarthyism A similar account in history to the Salem Witch trials was an era in the United States called McCarthyism. This was based on the battle between capitalism and communism. Capitalism is where there is free trade and individuals work for the specific amount of money they earn. In contrast, communism is where everyone is treated equally in the economy and, more or less, earns the same amount of money. America is a country that did not and still does not believe in communism. At one point it was feared as the communists in Russia and China had gained information on the atomic bomb and its design. This is where Joseph Raymond McCarthy came in. He was made chairman of the Government Committee on Operations of the Senate, which was an investigation unit in America. ...read more.

This was the inevitable consequence of being accused communist beliefs, similar to the unavoidable consequence of being an alleged witch in the time of the Salem Witch Trials, which was likely to be a death sentence. You can now see that many people called this anti-communist hysteria a 'witch hunt', which later on became known as McCarthyism. McCarthy targeted many people, mostly the democrats such a Harry Truman and his colleagues who were portrayed as being soft on communism. McCarthy's campaign was proving to be very strong. The peak of McCarthy's influential strength was revealed when his crusade against communism helped his fellow republican, Dwight Eisenhower win the presidential election in 1952. Many politicians realised that McCarthy had great persuasive abilities towards the American citizens and so were unwilling to criticise him at any extent. A comment revealed that McCarthy was feared by other politicians. ...read more.

Dwight Eisenhower, the president was furious at McCarthy and decided that this anti-communist hysteria had to come to an end. McCarthy's tactics and methods were publicised and vice-president, Richard Nixon had made a speech criticising McCarthy. It was a short time until McCarthy was expelled from his position as Chairman of the Government Committee on Operations of the Senate. He had lost his power and the media lost interest in his claims of communist conspiracy. The era of McCarthyism was over. Arthur Miller, the author of 'The Crucible' was somewhat inspired by the decade of McCarthyism. He researched into anti-communist hysteria and also the Salem Witch Trials, where he had found that the two events were very similar. He decided to create a play under the category of a parody to show the madness that occurred due to the issue of witches in 1692. This excitement or hysteria was shown as a real event that happened in the past, but at the same time as a comically ridiculous event that was the cause for many deaths of many innocent people. ...read more.