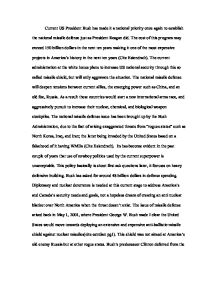 Current US President Bush has made it a national priority once again to establish the national missile defense just as President Reagan did. The cost of this program may exceed 150 billion dollars in the next ten years making it one of the most expensive projects in America's history in the next ten years (Cite Esiendrath). The current administration at the white house plans to increase US national security through this so called missile shield, but will only aggravate the situation. The national missile defense will deepen tensions between current allies, the emerging power such as China, and an old foe, Russia. As a result these countries would start a new international arms race, and aggressively pursuit to increase their nuclear, chemical, and biological weapon stockpiles. The national missile defense issue has been brought up by the Bush Administration, due to the fact of arising exaggerated threats from "rogues states" such as North Korea, Iraq, and Iran; the latter being invaded by the United States based on a falsehood of it having WMDs (Cite Esiendrath). Its has become evident in the past couple of years that use of cowboy politics used by the current superpower is unacceptable. This policy basically is shoot first ask questions later, it focuses on heavy defensive building. Bush has asked for around 48 billion dollars in defense spending. ...read more.

Why is the Missile defense program being pursued so actively? The weapons industry and weapon labs greatly benefit from either extending their lucrative contracts or acquiring them. The politicians are helping the weapons industry because they got into office through financial campaign donations from these actors (Cite Estridian). A Ballistic Missile is a missile that is self-propelled in the launching stage, which then freely falls freely in its descent to its target(cite Estirdina). With the advancement of technology the missiles range and warhead capacity increased heavily. To counter the threat of ballistic missiles, anti ballistic missile systems were attempted to be brought into active duty. Anti-ballistic missile systems are programmed to intercept and shoot down an incoming nuclear warhead ( cite estridian). During the cold war, the missile defense proved to be incompetent as the Soviet Union arsenal of thousands of nuclear armed missiles would overrun and swarm the defense system as the system wouldn't have enough missiles to match the attack(cite endiriate). The Soviets strategy proved to be cheaper and more effective as they would simply develop more missiles. As a result the anti-ballistic missile treaty was formed, to deter both sides from continuing to develop offensive weapons. The aim of the missile defense systems prior to Reagan's presidency was to deter enough missiles in order to give the United States enough functional silos to retaliate. ...read more.

Unfortunately, in recent times the Bush Administration has shunned, ignored, and rejected talks with North Korea over its nuclear program and economy. This has resulted in the country testing an atomic weapon, in order to get world wide attention, so it can force the U.S and its regional neighbors into talks. Iran has accelerated its nuclear program in response to President Bush labeling it as an "axis of evil", and US military invasion of Afghanistan and Iraq. Iran has concluded that if it possess nuclear weapons the US will think twice before invading it. Iran's goal is not to threaten U.S soil, but to challenge its authority in the Middle East by establishing itself as the superpower of its region (cite ecriterian 79). According to a recent leaked CIA report, it "found no conclusive evidence, as yet, of a secret Iranian nuclear weapons program running parallel to the civilian operations that Iran has declared to the International Atomic Energy Agency"(cite http://www.truthout.org/docs_2006/112006S.shtml). Anti-ballistic missile defense will simply not work. A missile's payload is not limited to one warhead, it can carry multiple warheads. Some of the missiles warheads may carry decoys, thus confusing the enemy's interceptor system causing to fail to destroy the warhead. Chemical and Biological weapons can be carried on a ballistic missile, however, they're not as lethal as nuclear weapons. Biological agents sometimes fail to perform during direct sunlight and can have negative reactions to environmental conditions (cite erterian 90). ...read more.