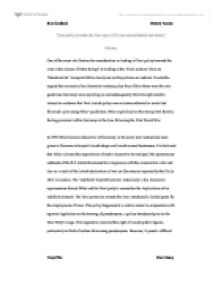 &quot;Nazi policy towards the Jews up to 1939 was uncoordinated and erratic.&quot;

"Nazi policy towards the Jews up to 1939 was uncoordinated and erratic." Discuss. One of the most vital factors for consideration in looking at Nazi policy towards the Jews is the release of Mein Kampf. In looking at the 'Final solution' from an 'Intentionalist' viewpoint Hitler clearly set out his policies on Judaism. It could be argued that as result of no alternative written policy from Hitler these were the sole guidelines Germany were operating on and subsequently Mein Kampf could be viewed as evidence that Nazi Jewish policy was not uncoordinated or erratic but followed a plan using Hitler' guidelines. Hitler capitalized on the strong Anti Semitic feeling prevalent within Germany at the time following the First World War. In 1933 Hitler became chancellor of Germany, in the same year instructions were given to Germans to boycott Jewish shops and Jewish owned businesses. It is believed that Hitler allowed the organization of such a boycott to try and quell the spontaneous outbursts of the S.A which threatened his allegiances with the conservative elite and also as a result of the Jewish declaration of war on Germany as reported by the Daily Mail in London. The 'indefinite' boycott however, lasted only a day. Economic repercussions forced Hitler and his Nazi party to reconsider the implications of an indefinite boycott. ...read more.

Then I use my intelligence to help me to maneuver him into a tight corner so that he cannot strike back, and then I deliver the fatal blow." It is clear to see from this excerpt that Hitler was clear on his personal plans with regards to the Jewish question. This details that Hitler had a plan concerning the Jews. This illustrates the fact that Nazi Jewish policy was coordinated. In the years 1937-38 the Nazi party set out to bankrupt and impoverish many Jews by forcing them to register their properties. Following this was the Aryanisation of Jewish businesses. Jewish workers and managers were dismissed and their businesses were sold at basement rate prices, fixed by the Nazi's, to their German Aryan counterparts. Jewish Doctors were also forbidden to practice medicine on any non Jewish patients and Jewish lawyers were forbidden to practice. Special measures were also taken at this time with Jewish identity cards. Identifying marks (a large red 'J') were added to Jewish identity cards and Jews were forced to adopt a middle name of either "Israel" for males or "Sara" for females. Such cards allowed the police to identify Jews easily. At this point following the 'Intentionalist' viewpoint it is difficult to argue that Nazi policy was uncoordinated or erratic. ...read more.

Despite being accepted by most Historians as an orchestrated attack on Jewry it depicted chaos prevalent amongst the German population. Simply the manner in which it was conducted illustrated how events could escalate in the hands of the German population if they were endorsed by the Nazi party. At the centre of this complicated debate lies Hitler's Annihilation Speech. It is difficult to argue that Nazi policy towards the Jews was uncoordinated or erratic and this is the main reason for why. 'Intentionalists' argue that Hitler outlined his aims and plans for the Jews in Mein Kampf. However, 'Structuralists' argue that Mein Kampf was a simply the ramblings of a prisoner and furthermore that the guidelines set out in Mein Kampf were only implemented due to Hitler's social Darwinist approach to government. Hitler in his Annihilation Speech is totally clear on his plans. Which argues the point once again that Nazi policy towards the Jews was planned and coordinated. In looking at Madagascar and the 'resettlement policy' that was planned to be implemented by the Nazi party, one can only argue the point that the Nazi party were not erratic or uncoordinated but simply developed chaotic policies towards the Jews with the breakout of The Second World War. ?? ?? ?? ?? Kim Goddard History Access Tony Pike Final Essay ...read more.