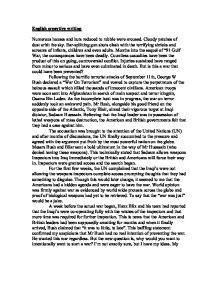 Numerous houses and huts reduced to rubble were aroused.

English creavtive writing Numerous houses and huts reduced to rubble were aroused. Cloudy patches of dust orbit the sky. Ear-splitting gun shots clash with the terrifying shrieks and screams of infants, children and even adults. Months into the sequel of "91 Gulf War, the consequences have been deadly. Countless casualties have been the product of this on going, controversial conflict. Injuries sustained have ranged from minor to serious and have even culminated in death. But is this a war that could have been prevented? Following the horrific terrorist attacks of September 11th, George W Bush declared a "War On Terrorism" and vowed to capture the perpetrators of the heinous assault which killed thousands of innocent civilians. American troops were soon sent into Afghanistan in search of main suspect and terror kingpin, Osama Bin Laden. As the incomplete hunt was in progress, the war on terror suddenly took an awkward path. Mr Bush, alongside his good friend on the opposite side of the Atlantic, Tony Blair, aimed their vigorous target at Iraqi dictator, Sadaam Huessain. ...read more.

This baffling statement confirmed my suspicions that Mr Bush had no real intention of preventing the war. He wanted this war regardless. But the new question is, why would you want to intentionally want to start a war? I'm not exactly sure, but I have my ideas. My main belief is that American and British troops would go into Iraq and take control of the premises and Iraq's precious oil supply. The UN was against declaring war on Iraq and therefore troops were not obliged to enter Iraq. In doing so, America was defying the law. By this time, Mr Bush and his chronies had realised that they would need to figure out a way on selling the war to the public. With no weapons of mass destruction discovered, that arguement alone was never going to be enough to swing the views of the American and British people, or any people for that matter. With nationalist feelings still sky-high after the events of the world trade centre, the American government thought that their best chance was to try and establish links between Sadaam and Al Queda. ...read more.

In this case, America attacked Iraq even though they weren't attacked so they are in the wrong. It also states that war must be the last resort. In this case, it was far from the last resort. This war could have so easily been prevented. Lives could have been saved but selfishness and greed have taken over common sense. Therefore, in my opinion, Mr Bush is also a terrorist. Lives have been terrorised and innocent people have died as a result of his actions. I am not denying that Sadaam Huessain is an evil man who needed to be ousted, but it could have done a different way without causing any pain and death. To conclude, I feel that this is a war with no real cause bought on by selfishness and greed. Mr Bush has until November 2004 to redeem himself before the next election. Mr Blair is slightly luckier, the next election is 2005. Both leaders need to use this time to figure out a way of restoring their credibility but I already fear that it is "too little, too late". ...read more.