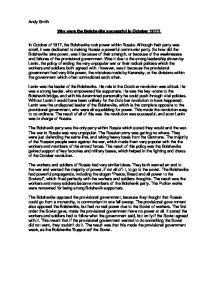 Why were the Bolsheviks successful in October 1917? In October of 1917, the Bolsheviks took power within Russia. Although their party was small, it was dedicated to making Russia a powerful communist party. So how did the Bolsheviks take power, was it because of their strength, or because of the weaknesses and failures of the provisional government. Was it due to the strong leadership shown by Lenin, the policy of ending the very unpopular war or their radical policies which the workers and soldiers both agreed with. However, was it because the provisional government had very little power, the mistakes made by Kerensky, or the divisions within the government which often contradicted each other. Lenin was the leader of the Bolsheviks. His role in the October revolution was critical. He was a strong leader, who empowered his supporters. He was the key-stone to the Bolshevik bridge, and with his determined personality he could push through vital policies. ...read more.

This made the government indecisive, which again made the government very unpopular, and again support for the Bolsheviks increased. In October 1917, the Bolshevik party staged a revolution to take power, but how did they do this. The Bolshevik party was still a relatively small party compared to others. The provisional government was very unpopular for things such as the Kerensky Offensive, and not stopping the war. The Bolsheviks had a strong leader, who was undisputed at the top of the party, and were campaigning to end the war. The reason they were so successful was because of the war. If the provisional government had ended the war, they would have taken away the Bolsheviks main policy, which gained them many thousands of supporters, and mainly gained them the support of some of the army. Without the army, they would have not been able to take over in October, and therefore would have not been successful. Andy Smith ...read more.