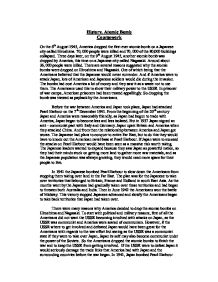 History, Atomic Bomb Coursework On the 6th August 1945, America dropped the first ever atomic bomb on a Japanese city called Hiroshima. 70, 000 people were killed and 70, 000 of the 80,000 buildings collapsed. Three days later, on the 9th August 1945, another atomic bomb was dropped by America, this time on a Japanese city called Nagasaki. Around about 36, 000 people were killed. There are several reasons suggested why the atomic bombs were dropped on Hiroshima and Nagasaki. One of which being that the Americans believed that the Japanese would never surrender. And if America were to attack Japan, lots of American and Japanese soldiers would die during the invasion. The bombs had cost America a lot of money and they saw it as a waste not to use them. The Americans used this to show their military power to the USSR. In prisoner of war camps, American prisoners had been treated appallingly. So dropping the bomb was viewed as payback by the Americans. Before the war between America and Japan took place, Japan had attacked Pearl Harbour on the 7th December 1941. From the beginning of the 20th century Japan and America were reasonably friendly, as Japan had begun to trade with America, Japan began to become less and less isolated. ...read more.

So the Americans dropped the atomic bombs to finish the war and to keep the USSR from getting involved. If the USSR were to defeat Japan it would seriously damage the trade links that America had with Japan and the surrounding countries before the war began. In 1941, Japan bombed Pearl Harbour and it is said that the Americans bombed Hiroshima and Nagasaki as an act of revenge against Japan for the bombing of Pearl Harbour. Also feelings were running high in America as reports of the treatment of American prisoners of war were filtering through to the American people. Many people saw dropping the bomb as a good way of bringing the war to a conclusion and freeing the American prisoners of war earlier. There were not just political and military reasons why the atomic bombs were dropped on Hiroshima and Nagasaki. There were also a lot of social reasons. To start with the Americans saw Japan as a second rate country. The Japanese had a very different attitude towards war than the Americans did, for example the Japanese used Kamikaze pilots and the soldiers saw surrendering as dishonourable. The only why to make the Japanese retreat would have been to drop the atomic bombs, not only would this have ended the war sooner rather than later but it would have saved a lot of Japanese and American lives, if the war was to continue. ...read more.

The atomic bomb dropped on Hiroshima was made from uranium and the atomic bomb dropped on Nagasaki was made from Plutonium. Conclusion Looking over all the possible reasons I could find on why the Americans dropped the atomic bombs on Hiroshima and Nagasaki. I have come to the conclusion that one of the main reason why the atomic bombs were dropped was because the Americans just could not find any other way to make the Japanese surrender. As the Japanese soldiers were very patriotic. And looked up to their emperor as a God. And by being dishonourable to the emperor, they saw it as being dishonourable to God. An example of how extreme their patriotism was they would use Kamikaze pilots. This is were the pilot would fly a plane loaded up with bombs straight into an enemy ship or any enemy target. The pilots would think that they would go straight up to heaven when they died as they had died for their Emperor who they regarded as a god. Some of the reasons for the attack on Japan can be linked together, for instance not wanting the USSR to become involved because of communism. America as a whole saw communism as a worldwide threat. Also any Soviet dominance in that area would damage trade previously enjoyed prior to the war. ?? ?? ?? ?? ...read more.