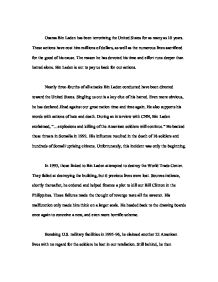 Osama Bin Laden has been terrorizing the United States for as many as 10 years. These actions have cost him millions of dollars, as well as the numerous lives sacrificed for the good of his cause. The reason he has devoted his time and effort runs deeper than hatred alone. Bin Laden is out to pay us back for our actions. Nearly three-fourths of all attacks Bin Laden conducted have been directed toward the United States. Singling us out is a key clue of his hatred. Even more obvious, he has declared Jihad against our great nation time and time again. He also supports his words with actions of hate and death. ...read more.

Sources indicate, shortly thereafter, he ordered and helped finance a plot to kill our Bill Clinton in the Philippines. These failures made the thought of revenge taste all the sweeter. His malfunction only made him think on a larger scale. He headed back to the drawing boards once again to conceive a new, and even more horrific scheme. Bombing U.S. military facilities in 1995-96, he claimed another 22 American lives with no regard for the soldiers he lost in our retaliation. Still behind, he then bombed American soil again at the Tanzanian and Kenyan embassies. Out of the 224 lives lost, only 12 were American. ...read more.

His followers were instructed to highjack planes and crash them into key financial and government buildings. They included the World Trade Center (again) and The Pentagon. He claimed and estimated 4000 lives, compared to only 68 American lives in the 5 previous incidents, thus finally achieving "victory." Deaths that have been directly linked to Bin Laden are as many as 4220. These deaths have occurred over the past 10 years. Plots are now being discovered more horrific than that of September 11th. It comes as no surprise that Bin Laden headed the attacks, keeping the facts presented in mind. This man must be stopped and put to death before he takes his revenge to new heights. Although this will never bring back the pain in suffering of millions, nor the deaths of thousands, it will demoralize his followers and prevent future attacks. ...read more.