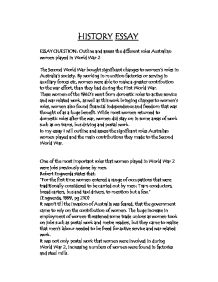 HISTORY ESSAY ESSAY QUESTION: Outline and assess the different roles Australian women played in World War 2 The Second World War bought significant changes to women's roles in Australia's society. By working in munition factories or serving in auxiliary forces etc, women were able to make a greater contribution to the war effort, than they had during the First World War. These women of the 1940's went from domestic roles to active service and war related work, as well as this work bringing changes to women's roles, women also found financial independence and freedom that was thought of as a huge benefit. While most women returned to domestic roles after the war, women did stay on in some areas of work such as on trams, bus driving and postal work. In my essay I will outline and assess the significant roles Australian women played and the main contributions they made to the Second World War. One of the most important roles that women played in World War 2 were jobs previously done by men. Robert Engwerda states that: "For the first time women entered a range of occupations that were traditionally considered to be carried out by men: Tram conductors, bread carters, bus and taxi drivers, to mention but a few." ...read more.

Despite the fact that Women in the Land Army were separated from their families, they felt they were better off than most. In Esme Corcoran's story, she states: "We girls in the Land Army were better off than most other people as all our work clothes are provided. Also, because I was on a farm I had plenty of butter, milk, eggs and meat, so I was able to send my ration coupons down to my mother." (Cotter & Engwerda, 1999, pg 211) As well as serving in the Australian Women's Land Army (AWLA), around the same time women's Auxiliary forces of the Army, Navy and Air Force were formed, but these services were more military based. The contribution of women to these services was thought of as a vital role in the war effort. Over 18000 women joined the Australian Women's Army Service (AWAS); Over 16000 joined the Women's Auxiliary Australian Air Force (WAAAF) and around 1400 in the Women's Royal Australian Navy Service (WRANS). About 500 of the women who joined the Army went to New Guinea and the rest stayed In Australia. The work women did were things like back-up work for the army, plane spotting and were trained in transport, communication and maintenance. ...read more.

There were orgainsations formed that were especially for women who were prepared to volunteer for war related work such as: Women Accepted for Volunteer Emergency Service (WAVES). R.S Dowling writes: "These young Australian Women have voluntarily undertaken one of the most gruelling, and certainly most horrendous tasks open to RAAF Nursing Service...They are referred to as 'Flying Angels', 'Angels of Mercy' or 'Ministering Angels'." (Eshuys, et.al. 1996, pg 229) All these roles women played in World War 2 were extremely important, because there would have been a huge lack of men fighting for Australia. The Government denied women's involvement in World War 1 but in World War 2 they relied heavily on their contribution. All those nurses that provided medical care for the wounded straight away states the importance of women in war. But it wasn't only nurses, it was also very important to have women in communication and signalling also in factories making weapons for use in the war. Women's roles in the 1940's were underestimated enormously by Australia's society but as this essay shows each and every role that was played by the women of Australia was vital, but the most significant included, all the nurses that provided help to the wounded and the skills they learnt that saved the lives of many men of Australia. By Lynsey Bramley! ...read more.