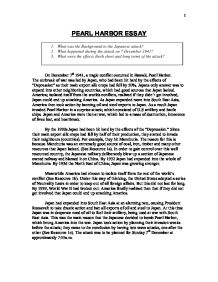 PEARL HARBOR ESSAY On December 7th 1941, a tragic conflict occurred in Hawaii, Pearl Harbor. The outbreak of war was led by Japan, who had been hit hard by the effects of "Depression" as their main export silk crops had fell by 50%. Japans only answer was to expand into other neighboring countries, which had good sources that Japan lacked. America; isolated itself from the worlds conflicts, realized if they didn't get involved, Japan could end up attacking America. As Japan expanded more into South East Asia, America then took action by banning oil and steel exports to Japan. As a result Japan invaded Pearl Harbor in a surprise attack; which consisted of U.S artillery and battle ships. Japan and America were then at war, which led to a mass of destruction, innocence of lives lost, and heartbreak. By the 1930s Japan had been hit hard by the effects of the "Depression." Since their main export silk crops had fell by half of their production, they started to invade their neighbours (countries). ...read more.

Prior to the bombings, although Japan was meant to be the first to attack, research shows in the present that America was the first to attack (See Resource 1e). America had sunk a Japanese submarine, hours before the attack occurred. In Japan's plans on the invasion of Pearl Harbor, their military forces and artillery towards the attack was one of their main concerns. The Japanese force consisted of 6 carriers and 423 planes, which bombed Pearl Harbor. They came in two waves, the first wave targeted at U.S airfields and the second wave targeting other ship and shipyard facilities. These air raids kept going from 7:53 a.m., until 9:45 a.m. At the end of the bombing, a mass destruction was left. A total of 8 battleships were badly damaged, and 5 sunk. Two out of the 5 sunken battleships were the USS Shaw and the USS Arizona (See Resources 2b & c). In addition, 3 small carriers, destroyers, smaller vessels and 188 aircrafts were as well lost. ...read more.

Originally America wanted to stay out of all these foreign affairs, but once December 7th had taken place, it was a different story. In addition there were many long-term effects of Pearl Harbor. Many peoples' loved ones had been killed, unfairly and unjustly, causing hatred and anger towards the Japanese, even today. Japan acted rashly and unintelligently to America, stopping the export of oil. For this they had to pay with losing the war, and losing respect. The invasion at Pearl Harbor was an unexpected attack to America. It brought America into World War II without warning as well. For such an unpredicted experience, the effects of the war were drastic and catastrophic. This incident showed how the most powerful country in the world could be struck with fear in an instant, by not being involved within the foreign conflicts in the world. This was a no-win situation for America, by being involved or not, the result would of led to war or conflict at some point. But the event of Pearl Harbor brought America more closely together, to deal with the bombings, conflicts as well as the mourning for their loved-lost ones. 1 ...read more.