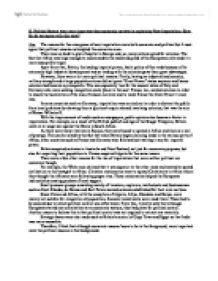 Q. Political factors were more important than economic motives in explaining New Imperialism. How far do you agree with this view? Ans. The reasons for the emergence of new imperialism were both economic and political but I must agree that political reasons outweighed the economic ones. There was no doubt a glut of capital in Europe and, so, many nations opted for colonies. The fact that Africa was large enough to accommodate the need and greed of the Europeans only made it a more susceptible target. Apart from that, Britain, the leading imperial power, had a policy of free trade because of its extremely high industrial development and so trading with the colonies gave them great advantages. ...read more.

With the improvement of media such as newspapers, public opinion also became a factor in imperialism. For example, as a result of the British public's outrage at the Kruger Telegram, Britain went on to wage war against the Boers in South Africa. As there were many rivalries in Europe, they were bound to spread in Africa and Asia as a war of prestige. This can be noted by the fact that when Britain began claiming lands in the various parts of Africa, other countries such as France and Germany also followed suit starting a race for imperial power. Britain acquired colonies in Australia and New Zealand, not just for economic purposes, but also for exporting their population to. ...read more.

Small pressure groups consisting mainly of travelers, explorers, intellectuals and businessmen such as Cecil Rhodes, de Brazza and Karl Peters wanted colonies established for their own motives. Since China and Africa, with the exception of Algeria, Libya, Rhodesia and Kenya, were mainly not suitable for emigration of population, financial investments were made there. These had to be secured due to which political control was often taken. From this, it can be seen that although Europeans started out colonization as an economic venture, they had plans for political control. Another reason to believe this is that political control was not required to extract raw materials. Strategic bases were also made such as Britain's control of Cape Town and Egypt so that India was more accessible. Therefore, I think that although economic reasons 'seem to be in the foreground, more important were the political reasons in the background. ...read more.