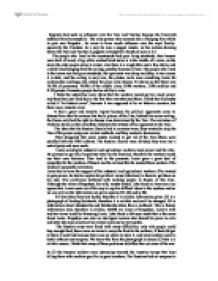 Rasputin had such an influence over the Tsar and Tsaritsa because the Tsarevich suffered from haemophilia.

Rasputin had such an influence over the Tsar and Tsaritsa because the Tsarevich suffered from haemophilia. The only person who seemed able of helping him whilst in pain was Rasputin , he came to have much influence over the royal family-especially the Tsaristsa. In a way he was a puppet master, as the cartoon drawing shows the Tsar and Tsaritsa as puppets in Rasputin's hands as seen in A2 The people who lived in the countryside had poor living standards, their houses were built of wood, a big, white washed brick stove is in the middle of a room, on the stove the older people sleep in winter, also there is a rough table and a few chairs, and a child's bed hanging from the ceiling, possibly because of rats. The people who lived in the towns also had poor standards, the apartment was damp and dirty, in two rooms it is dark, and the ceiling is very low, the plaster walls were crumbling, holes for cockroaches and bugs, this makes the place cold. Source A5 shows us that there was 70.5% of peasantry, 10.0% of the middle class, 8.0% workers, 2.0% nobility and 0.5% priests. ...read more.

She can see nothing wrong with his behaviour, she also thinks "God opens everything to him" and she "immensely admires his wonderful brain". This shows that she will follow all of Rasputins advice, and she sees good in him". Father Shavelski's opinion is very different, he says that, Rasputin, he is considered to of helped to bring down the Russian royal family. I agree with father Shevelski, because he knew the royal family well and Rasputin well and his view is reliable and he is a clever man. The opinion of the priest in C5 is far more reliable than that of the empress as far as Rasputin's abilities are concerned. It was a great mistake of the part of the Tsar to go to the front line and take command of Russians army, leaving the Tsaritsa in charge of the government in Petrograd with Rasputin as her "chief advisor". She refused the help of the Duma or parliament and so the politicians and ordinary people came to hate her even more. The central Government of Russia was gradually collapsing. Sources C6 and C7 tell us that conditions in Petrograd in 1917 were very bad, there was no food, no fuel and disease was common, as well as this C7 says that the winter of 1917 was very cold. ...read more.

The lack of fairness in Russian society, most people were very poor, a few were rich and had more rights. The influence of Rasputin, the puppet master, especially on the Tsaritsa. The Tsaritsa was in charge of the government in Petrograd when the Tsar went to the front to be with his army. This was a big mistake. By spring of 1917, no one wanted the Tsar's government to survive. The mistake made by the Provisional Government to continue fighting in World War 1, especially Russia failed to win any battles, due to the reason they had no weapons. Lenin promised to end the war. This promise was supported by many and also earned the Bolsheviks many supporters, especially amongst the Russian soldiers. The leadership of Lenin, his fanaticism, he was certain that his political beliefs were right, his determination to stage the revolt after the defeat of Kornelov despite the opposition of fellow Bolsheviks.Trotsky who was another leading Bolshevik, he organised the Red Guard which was very important, because it seized key buildings in Petrograd. The Bolsheviks support amongst workers in Petrograd, the soldiers in the Russian army and the peasants in the countryside for a better quality of life. ...read more.