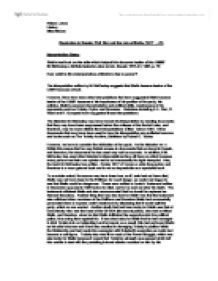 It was also lucky for Stalin that he had managed to trick Trotsky into not attending Lenin's funeral, as a result, this had portrayed Stalin as his chief mourner and it had also resulted in damaging Trotsky's position within the Bolsheviks and had made him unpopular with Bolshevik supporters as Lenin had become a cult figure. Trotsky also was ill for most of the Power Struggle, which was also lucky for Stalin because it meant that Trotsky's strength was sapped which left him unable to deal with the persisting internal attacks mounted on him by his colleagues and enemies. In addition, it meant that he could not be involved in crucial votes in the Politburo. However, there were certain times when important meetings were held by his bedside. When he was left out on crucial votes it meant that Stalin could have his own way, and increased his chances of being victorious in the Power Struggle. However, the source may not also be entirely true, because it has to be stressed that there were other reasons why Stalin had become leader of the USSR. ...read more.

Another mistake that Trotsky made is agreeing to the suppression of Lenin's Testament as if it had not been kept a secret then it would have been very unlikely that Stalin would have got the chance to win the Power Struggle. Another reason why Stalin became leader was that he was politically very skilful and cunning. An example was that there had been an argument between the Politburo members about having a Permanent Revolution. However, Stalin had favoured Socialism in One Country because that had been more popular with most party members and with their supporters. The same was that of other policies, that Stalin adopted policies that were popular with the majority of the Communist Part. It is therefore reasonable to suggest that Stalin had luck on his side, which helped him, become leader of the USSR. However, there were other factors that were important to help Stalin become leader of Russia. These include the weaknesses of the other contenders in the power struggle, Stalin's political skills and his personal characteristics. Rhiann Johns History Miss McCue ...read more.