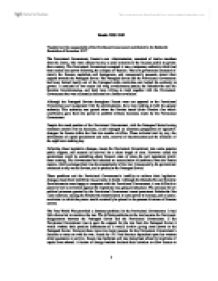 The Russian public believed this decision was unwarranted since the food was desperately needed more in the cities and the majority of the Russian public did not want the war to continue. The peasants were also clamouring for greater land distribution. The Provisional government promised this land to the peasants which never materialised. This caused severe discontent among the peasants. The Bolshevik Party appealed to their beliefs and offered them their land and food gaining immense support. The dissatisfaction of Russian society with the Provisional government meant they were easily aroused into drastic action by revolutionary groups. The First World War also had a devastating effect on the Russian economy. The Provisional government was unable to afford the war effort, inflation occurred and paper money had to be printed. This consequently meant that the workers could afford less making them even worse off. They had no money to buy the small high priced amounts of food that was available. The Bolsheviks were the only party against the War and consequently appealed to their beliefs. The Bolsheviks were also very sophisticated at infiltrating ideas into the Russian army that the soldiers were being used as 'common fodder', fighting in a war which only served the interests of the Russian upper classes. This was important in raising anti-war opinion and consequently the popularity of the Bolsheviks. The Provisional Government was forced to carry on with the war even if it was against the majority of the Russian public's beliefs. If Russia was going to withdraw from the war then the military personnel would have returned and probably would have joined the Petrograd Soviet. With this extra support the Petrograd Soviet could have ultimately controlled the military, consequently their power would have increased and the Provisional Government would not have the power over Russia to implement its ideas. However, the Provisional Government's decision to carry on with the war increased the support of the anti-war Bolsheviks. ...read more.

He emphasised that the war was a war of Capitalist Imperialism, and that the government were participating in the slaughter of millions of Russian men in the war. Lenin was also able to get Trotsky on his side, and through Trotsky's fast organisation of the Red Guard he made it possible for a Bolshevik Revolution to occur quickly and effectively. However it has to be argued that the action undertaken by Lenin inevitably led to the revolution and not the Kornilov revolt as Kerensy claimed. The results of the municipal elections in Moscow show that the Bolsheviks cumulated 49.6% of the seats, occurring in 1917, before the Kornilov revolt. Lenin's written works 'fskra' about a Marxist revolution and all of his revolutionary ideas made a Bolshevik revolution inevitable before the Kornilov revolt. A long-term problem constantly led to a number of short-term problems which acted as a powerful catalyst to a further revolution. Lenin's oratory, personality and leadership skills led to triggers leading to the Bolshevik revolution. Trotsky's organisation and use of the Red Guards, and the effects of the Kornilov Revolt, August 1917 were the triggers. As Lenin's political acumen acerbated these factors Kerensky thought of a plan to get people on his side which was the Kornilov Revolt but unfortunately it ended up backfiring on him. After the Kornilov Revolt change was inevitable, though Kerensky could have taken more effective action in stopping a Bolshevik Revolution. He could have discredited Lenin but Kerensky did not even attempt to do this. The support of the Bolsheviks was great enough to take power. Many people knew revolution was certain, but it specifically came in the shape of a Bolshevik Revolution because Lenin with his excellent oratory, personality and leadership skills was the only person who stood up and took control. Lenin gained the support of the public and got their mood of the time correct and so epitomised powerfully what the public wanted. Their needs were exemplified in his April Theses which was 'peace, bread and land'. 1 ...read more.