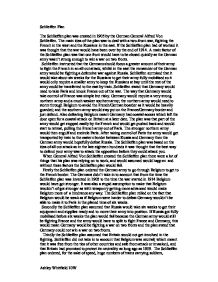 Schlieffen Plan The Schlieffen plan was created in 1905 by the German General Alfred Von Schlieffen. The main idea of the plan was to deal with a two-front-war, fighting the French in the west and the Russians in the east. If the Schlieffen plan had of worked it was thought that the war would have been over by the end of 1914. A main factor of the Schlieffen plan was that one front would have to be closed quickly as the German army wasn't strong enough to win a war on two fronts. Schlieffen instructed that the Germans should focus a greater amount of their army to fight the French in an all out attack, whilst in the east the remainder of the German army would be fighting a defensive war against Russia. Schlieffen surmised that it would take about six weeks for the Russians to get their army fully mobilised so it would only require a smaller army to keep the Russians at bay until the rest of the army could be transferred to the east by train. Schlieffen stated that Germany would need to take Paris and knock France out of the war. The way that Germany would take control of France was simple but risky. Germany would require a very strong northern army and a much weaker southern army; the northern army would need to storm through Belgium to avoid the ...read more.

army would have to split to fight France and Germany, this would mean Germany would be fighting a war on two fronts and the plan stated that Germany could not win a war on two fronts. Thirdly the Schlieffen plan assumed that Britain would not get involved in the fighting. Schlieffen did not take in to account that Belgium was neutral( which meant that it was free from the ties of other countries and safe from attack or invasion), and that Britain had promised to protect its neutrality as long ago as 1839. The Schlieffen plan ordered, for the sake of speed, huge numbers of trains carrying soldiers, equipment, supplies and horses to cross the Belgium frontier immediately. This meant Belgium neutrality would be broken. Also according to the Schlieffen plan France would try to attack their boarder with Germany and wouldn't protect Paris. Because of this the plan instructed that the army would swing around Paris and then chase the French army from behind to catch them off guard. If France attacked the German army head on their way to Paris it would mean they would be slowed down which would lead to again stopping the Germans from defeating France in the time allowance of six weeks. As well, one of the main things that Germany assumed was that the Schlieffen plan would still work and be effective after nine years. ...read more.

After that Von Molke decided to cut inside Paris, because of the threat of the French and British army, rather than swing down around it. This meant that the Schlieffen plan had been ignored and the Schlieffen plan wasn't that flexible so if certain aspects were not carried out it would more than likely fail. One of the main reasons the Schlieffen plan failed was due to the plan being suited to old fighting tactics of cavalry charges and all out attack, not trench warfare and machine guns. In conclusion the Schlieffen plan failed because it assumed too much. It assumed that Russia would take six weeks to mobilise. This lead to a big failure in the plan because Russia was mobilised before the six weeks so Germany ended up fighting a two front war that was doomed from the start. Also the Plan didn't account for the entry of Britain in the war, this was their biggest downfall as it meant they were fighting against a lot more soldiers than they expected. A small but important factor was the Belgium put up a lot more resistance which slowed them down. An old German General called Helmuth von Moltke said "In war there are usually three courses of action open to the enemy, and he usually chooses the fourth". This relates to the Schlieffen plan because the plan assumed that countries would do certain things and the countries didn't always do what had been expected of them. Ashley Whitfield 10W ...read more.