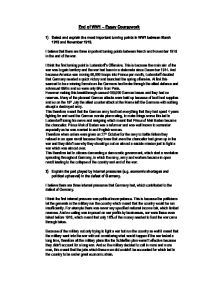 Select and explain the most important turning points in WW1 between March 1918 and November 1918.

End of WW1 - Essay Coursework 1) Select and explain the most important turning points in WW1 between March 1918 and November 1918. I believe that there are three important turning points between March and November 1918 in the end of the war. I think the first turning point is Ludendorff's Offensive. This is because the main aim of the war was to gain territory and the war had been in a stalemate since December 1914. And because America was moving 50,000 troops into France per month, Ludendorff decided that Germany needed a quick victory and launched the spring offensive. At first this seemed to be a winning formula as the Germans had broke through the allied defence and advanced 65Km and so were only 5Km from Paris. However making this breakthrough caused 400,000 German losses and they had no reserves. Many of the planned German attacks were held up because of bad food supplies and so on the 18th July the allied counter attack at the Marne left the Germans with nothing except a destroyed army. ...read more.

Because of the military not only trying to fight a war but run the country as well it meant that the military went into the war with out considering what would happen if the war lasted a long time, therefore all the military plans like the Schlieffen plan weren't effective because they didn't account for a long war. And so the military decided to call in more and more men, this meant that the jobs which these men did couldn't be accounted for which led to the country to be under great economic strain. Because of this and Germany's incompetence to defend her port, the allies blocked all of Germany's ports in 1915, which meant that Germany couldn't export any goods to make profits which intern meant that the economy would be on the brink of collapse and so wouldn't be able to fund any more money for artillery for the military. And also Germany couldn't import and food for civilians and soldiers which meant that the diet was poor and so meant that disease started spreading and by 1918 750,000 men died of starvation and influenza. ...read more.