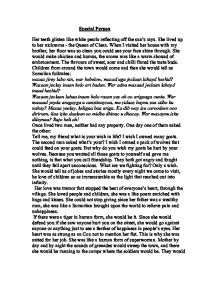 If there were a tiger in human form, she would be it. Since she would defend you if she saw anyone hurt you on the street, she would go against anyone or anything just to see a feather of happiness in people's eyes. Her heart was as strong as an Cox not to mention her fist. This is why she was suited for her job. She was like a human form of superwoman. Mother by day and by night the sounds of grenades would sweep the town, and there she would be running to the camps where the soldiers would be. They would call out for her "nurse, nurse". Cries of wounded, bloody men could be heard from corners of the town. She gets her an-theistic injection, which would calm them or put a cold towel over their heads. The soldiers would sometimes whisper to her to send a message to their families. Then when dawn broke out she make or bake something and she would go the soldier's families to tell the message. ...read more.

people could not go cannot go on and they could not stop, One chance is all we've got, We have to live life how we want to, no one knew how to deal with such news hoping that it was not yet real. It was like broken pieces of glass that was unable to mend. When joy is caused by materials it is meaningless to lose it but when it is caused by a grandma that gives wisdom and comfort your whole world come crashing down with blazes of fire. Those few days everything that seemed living, died. People were in their own distress, trapped in a circle of misery of the havoc to be reaped upon the human heart, a nightmare closing in, an empty shell walking without that adheres to be helped. Bodies cold, minds rotting and old, but still times come and then they go, on an endless and insatiable flow. The tinker of light upon the sky floods in memories of happiness, times come and go, people come and go but memories last a lifetime. ...read more.