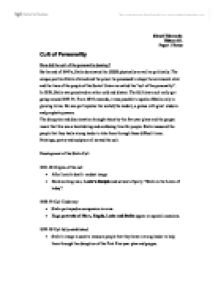 Shruti Tibrewala History SL Paper 1 Notes Cult of Personality How did the cult of the personality develop? By the end of 1940's, Stalin dominated the USSR physically as well as politically. The unique position Stalin attained and the power he possessed to shape the communist state and the lives of the people of the Soviet Union are called the "cult of the personality". In 1929, Stalin was perceived as rather cold and distant. The full blown cult really got going around 1933-34. From 1935 onwards, it was possible to speak of Stalin only in glowing terms. ...read more.

"Stalin is the Lenin of today". 1929-33 Cult Underway * Stalin portrayed as companion in arms * Huge portraits of Marx, Engels, Lenin and Stalin appear on special occasions. 1933-39 Cult fully established * Stalin's image is used to reassure people that they have a strong leader to help them through the disruption of the First Five year plan and purges. * Paintings, poems and sculptures promote the cult. * All powerful leader Post 1945 * Image is everywhere- success as a war leader * Portraits show him in God like solitude, superior and apart * Elaborate celebrations for his 70th bday Rewriting history An aspect of the cult was the reinterpretation of history in Stalin's favor. ...read more.

They viewed Stalin as- 1. Benefactor 2. Traditional defender of the people 3. Charismatic leader There were of course enough people- intellectuals, experienced party members who knew about the absurdities of the cult. There was certain amount of criticism. But even amongst those who did not like him, there were many who respected and admired him. He had industrialized the USSR and made it into a respectful world power. The cult had those helped bring solidity, confidence and coherence to that society during a period of rapid change and development. The cult was at its height in the 1930's. Historiographies Robert Thurston- People believed that the show trials were genuine and that Stalin was rooting out wreckers and saboteurs. This can account for the huge affection they had for him. ...read more.