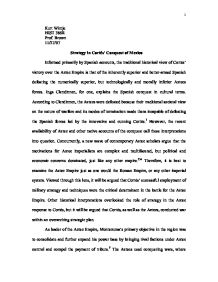 Strategy in Cortes' conquest of Mexico

Kurt Wintje HIST 386R Prof. Brown 11/27/07 Strategy in Cort�s' Conquest of Mexico Informed primarily by Spanish accounts, the traditional historical view of Cort�s' victory over the Aztec Empire is that of the inherently superior and better-armed Spanish defeating the numerically superior, but technologically and morally inferior Aztecs forces. Inga Clendinnen, for one, explains the Spanish conquest in cultural terms. According to Clendinnen, the Aztecs were defeated because their traditional societal view on the nature of warfare and its modes of termination made them incapable of defeating the Spanish forces led by the innovative and cunning Cort�s.1 However, the recent availability of Aztec and other native accounts of the conquest call these interpretations into question. Concurrently, a new wave of contemporary Aztec scholars argue that the motivations for Aztec imperialism are complex and multifaceted, but political and economic concerns dominated, just like any other empire.234 Therefore, it is best to examine the Aztec Empire just as one would the Roman Empire, or any other imperial system. Viewed through this lens, it will be argued that Cort�s' successful employment of military strategy and techniques were the critical determinant in the battle for the Aztec Empire. Other historical interpretations overlooked the role of strategy in the Aztec response to Cort�s, but it will be argued that Cort�s, as well as the Aztecs, conducted war within an overarching strategic plan. As leader of the Aztec Empire, Montezuma's primary objective in the region was to consolidate and further expand his power base by bringing rival factions under Aztec control and compel the payment of tribute.5 The Aztecs used conquering wars, where Aztec warriors attacked and quickly overwhelmed the enemy and forced them into submission, but so called "flower wars" to achieve this end as well. Clendinnen and others have misinterpreted the "flower wars" as merely serving ritualistic aims, while other scholars described it as a training ground for Aztec soldiers. Hassig argues these "flower wars" were in fact a type of imperial war with important strategic objectives. ...read more.

The Emperor was not just 'he who commands', but also the 'heart of the city'."19 The power vacuum left the Aztec empire vulnerable not only to rebellion from the tributaries, but more critically, to organized attacks from Cort�s and his men. The military strategies and tactics of the Spanish and Aztecs became most apparent once the battle for Tenochtitlan commenced. This fighting began when Cort�s was away from the city and the Aztecs responded to the Spaniards' massacre of participants at a ceremony honoring the god Huitzilopochtl. Cort�s' deputy Pedro de Alvarado carried out the massacre in response to the report that there would be human sacrifices at the festival. Leon-Portillo's work contains a vivid account from the Aztec perspective of this massacre: "They attacked all the celebrants, stabbing them, spearing the, striking them with their swords...the blood of the warriors flowed like water and gathered into pools."20 Just as there was no strategic plan behind the Spaniards' attack on the celebrants, the Aztecs' response to the attacks occurred outside of the context of any organized plan or military strategy. The Aztec sources depict the uprising against the Spanish as an impromptu response to the slaughter. While hastily assembled, the Aztecs' response revealed signs of organization and clear purpose: When the news of this massacre was heard outside the Sacred Patio, a great cry went up: 'Mexicanos, come running! Bring your spears and shields! The strangers have murdered our warriors!' This cry was answered with a roar of grief and anger: the people shouted and wailed and beat their palms against their mouths. The captains assembled at once, as if the hour had been determined in advance.21 The Aztecs attacked the Spaniards with all available weapons. They also made an effort to lay siege to the Spanish by widening and deepening the canals, blocking the roads with walls, as well as erecting bulwarks to prevent the Spanish from breaking out. ...read more.