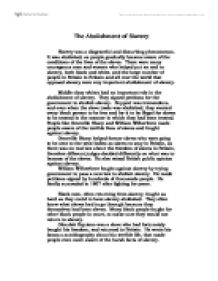 The Abolishment of Slavery.

The Abolishment of Slavery Slavery was a disgraceful and disturbing phenomenon. It was abolished, as people gradually became aware of the conditions of the lives of the slaves. There were many courageous men and women who helped put an end to slavery, both black and white, and the large number of people in Britain in Britain and all over the world that opposed slavery were very important abolishment of slavery. Middle class whites had an important role in the abolishment of slavery. They signed petitions for the government to abolish slavery. ...read more.

He also raised British public opinion against slavery. William Wilberforce fought against slavery by trying government to pass a new law to abolish slavery. He made petitions signed by hundreds of thousands people. He finally succeeded in 1807 after fighting for years. Black men, often returning from slavery, fought as hard as they could to have slavery abolished. They often knew what slaves had to go through because they themselves had been slaves. Many black people fought for other black people in court, to make sure they would not return to slavery. ...read more.

Slave owners around the world became worried about they're slaves doing the same thing. People also said that this was an example of what would happen if slaves were freed, and that slaves had no responsibility and therefore shouldn't be treated as normal white men. Britain had made incredible amounts of money out of slaves - trading them and using them. But soon they found out that it was not making any profit on trading and using slaves. As the slaves were not getting paid, they weren't working very hard. Other countries were producing the same things that the slaves were making, but at a cheaper price. For example, sugar cane could be found in Cuba and Brazil at much lower prices. ...read more.