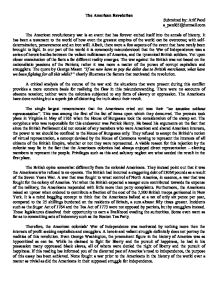 The American Revolution Submitted by: Arif Patel [email protected] The American revolutionary war is an event that has forever etched itself into the annals of history. It has been a testament to the world of how even the greatest empires of the world can be overcome; with self-determination, perseverance and an iron will. Albeit, there were a few aspects of the event that have rarely been brought to light. In our part of the world it is commonly misunderstood that the War of Independence was a series of heroic battles between the valiant militiamen of America, and the tyrannical British soldiers. Yet upon closer examination of the facts a far different reality emerges. The war against the British was not based on the nationalistic passions of the Patriots; rather it was more a matter of the purses of corrupt capitalists and smugglers. ...read more.

The corypheus who was responsible for this endeavour was Patrick Henry. He based his arguments on the fact that since the British Parliament did not consist of any members who were American and shared American interests, the power to tax should be confined to the House of Burgesses only. They refused to accept the British's notion of virtual representation, a concept devised by the House of Commons vowing to represent the interests of all citizens of the British Empire, whether or not they were represented. A viable reason for this rejection by the colonist may lie in the fact that the Americans colonists had always enjoyed direct representation - electing members to represent the people. Privileges such as this and salutary neglect are what seeded the revolt in the first place. The British opine somewhat differently from the colonial Americans. They instead point out that it was the Americans who refused to co-operate. ...read more.

These legislatures dissolved their opportunity to earn a livelihood evading the authorities. Some even went as far as to committing acts of indecency such as the Boston Tea Party. Therefore, the American colonials' War of Independence was motivated by nothing more then the interests of profit seeking capitalists and smugglers. A heroic and valiant struggle definitely does not portray the realities of this revolution. Even George Washington, the preeminent figure in the history of America was as hypocritical as can be. While he claimed to fight for liberty and the pursuit of happiness, he had in his possession many oppressed black slaves, all of whom were denied the right of liberty and the pursuit of happiness. If this reading has informed you of the distorted past of America's road to independence, the purpose of this essay has been achieved. None fought a war prior to the Americans in the history of the world over a matter as trivial as did the Americans in their supposed struggle for independence. ...read more.