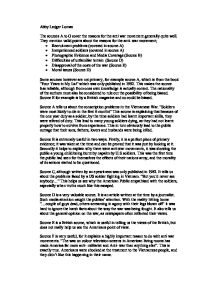 Abby Ledger Lomas The sources A to G cover the reasons for the anti war movement generally quite well. They mention valid points about the reasons for the anti- war movement; * Recruitment problems (covered in source A) * Inexperienced soldiers (covered in source A) * Photographic Evidence and Media Coverage (Source B) * Difficulties of unfamiliar terrain (Source D) * Disapproval of the costs of the war (Source E) * Moral issues (Source D) Some sources however are not primary, for example source A, which is from the book "Four Years in My Lai" which was only published in 1992. This makes the source less reliable, although from ones own knowledge is actually correct. The nationality of the authors must also be considered to rule out the possibility of being biased. Source E for example is by a British magazine and so could be biased. Source A tells us about the conscription problems in the Vietnamese War. "Soldiers were most likely to die in the first 6 months" This source is explaining that because of the one year duty as a soldier, by the time soldiers had learnt important skills, they were relived of duty. ...read more.

Source E is a British source, which is useful in telling us the views of the British, but does not really help us see the Americans point of view. Source F is very useful, for it explains a highly important reason to do with anti war movements. "The was on colour television screens in American living rooms has made America far more anti- militarist and Anti- war than anything else". This is exactly true. Americans were shocked at the treatment to the Vietnamese people, and they didn't like this happening in their name. What none of the sources mention are: * "Fragging" (soldiers killing their own officers) * "Draft Dodgers" (men who dodged their duty to fight in opposition to the war) * Martin Luther Kings public speeches against the war * Killings at Peace Protests * "Operation Phoenix" * The Pentagon Papers * Support for the war. The fact that soldiers killed their own officers shows that the moral of soldiers was not high. ...read more.

These papers documented the fact that important decisions to step up the war had been made without their permission. Secretly, the papers were photocopied and sent to the New York Times. This again let the public see the real truth and more opposition was created. The sources A-G do not tell us that some people were actually in favour of the war. This is part of a piece of writing written by Michael Joseph in 1974 "I wish I had a draft card, Bomb Hanoi, We love America". This is a valuable piece of information as it gives us an objective view from both sides. The sources A to G have valuable pieces of information that help us see why there was an anti war movement in the U.S. They do not however give ALL the information needed to understand, and as is shown in my essay there is a considerable amount more to look at before we can make an informed decision on how useful the sources A to G are. ...read more.