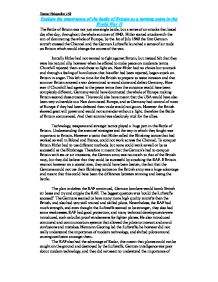 The Battle of Britain was not just one single battle, but a series of air attacks that lasted day after day, throughout the whole summer of 1940. Hitler

The Battle of Britain was not just one single battle, but a series of air attacks that lasted day after day, throughout the whole summer of 1940. Hitler started attacks with the aim of dominating the whole of Europe, by the 1st of July 1940 the first German aircraft crossed the Channel and the German Luftwaffe launched a series of air raids on Britain which would change the course of the war. Initially Hitler had not wanted to fight against Britain, but instead felt that they were his natural ally; however when he offered to make peace on moderate terms, Churchill rejected them and chose to fight on. Now Hitler had no choice but to attack and through a feeling of humiliation that his offer had been rejected, began attack on Britain in anger. This left no time for the British to prepare to resist invasion and that summer Britain entered a war determined to stand alone and defeat Germany. How ever if Churchill had agreed to the peace terms then the outcome would have been completely different, Germany would have dominated the whole of Europe making Britain second class citizens. This would also have meant that the USA would have also been very vulnerable to a Nazi dominated Europe, and as Germany had control of most of Europe if they had been defeated then trade would not go on. ...read more.

German fighters also only had enough fuel to guarantee themselves about 30 minutes of flight time over England, and those pilots whom baled out over England became prisoners of war. On the other hand, the RAF fighter planes were much stronger than those of the Luftwaffe. Pilots organised their regions so that they could meet attacks quickly and pilots whom baled out over Britain could return easily, for re-fuelling or other duties. This was an immense turning point, as this meant that the German's main target for attack would not be as successful as they hoped. The lack of knowledge and sufficient materials meant that Britain had a better chance in winning the battle. However if the Germans had understood the tactics of radar and so on, they probably would have had much more of a better chance. But their lack of understanding showed that German's armed forces could not keep up with the RAF and with any long drawn out confrontations. When the Battle started, citizens felt the need to contribute to the war front. Now that there was no chance of alliance between Germany and Britain, and the citizens were being bombed and under danger, it was a reason for them to give something towards the effort. People felt that even if they did not fight Germany would take over anyway, and as the reality of the war hit the people of Britain, they felt the need to put in some effort. ...read more.

It was therefore not a turning point; they would have remained to launch a counter attack. The Battle of Britain was a turning point in WWII, as there are more valid arguments and points proving how some certain actions did turn around the victory of WWII and the battle. The fact that German's air force tactics were not so good and modern as was the RAF's gave them a lot of advantage throughout the battle, if the German's had chosen a different method of counter attack then maybe the outcome would have been different, another mistake that they also made was to understand the concept of radar. If they had thought through their tactics and technology/weapons the outcome may have been different. Another reason for the turning point was the enthusiasm of the British people, the way that they were keen to do their part in the war. The main reason for a turning point was the fact that the loss of the Battle of Britain was the first real defeat for Hitler, it boosted moral of the British, yet made Hitler seem weak. The loss of war for Germany, and the continuous fighting would have made them tired and not so keen and enthusiastic as they were before and therefore the Battle of Britain did a lot for the outcome and was a very important turning point in World War Two. Yamini Veluppillai 11B Explain the importance of the battle of Britain as a turning point in the World War II ...read more.