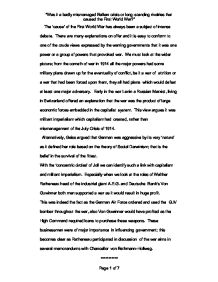 The 'cause' of the First World War.

The 'cause' of the First World War has always been a subject of intense debate. There are many explanations on offer and it is easy to conform to one of the crude views expressed by the warring governments that it was one power or a group of powers that provoked war. We must look at the wider picture; from the cometh of war in 1914 all the major powers had some military plans drawn up for the eventuality of conflict, be it a war of attrition or a war that had been forced upon them, they all had plans which would defeat at least one major adversary. Early in the war Lenin a Russian Marxist, living in Switzerland offered an explanation that the war was the product of large economic forces embedded in the capitalist system. This view argues it was militant imperialism which capitalism had created, rather than mismanagement of the July Crisis of 1914. Alternatively, Geiss argued that German was aggressive by its very 'nature' as it defined her role based on the theory of Social Darwinism; that is the belief in the survival of the fittest. With the 'concentric circles' of Joll we can identify such a link with capitalism and militant imperialism. Especially when we look at the roles of Walther Ratheneau head of the industrial giant A.E.G. ...read more.

In order to do this, he required colonies and its aims with the Second Fleet Act in 1900 a large Navy to accompany. This made the British suspicious of Germany's intentions and with the aim of an equal force by 1917; a naval race began with the construction of the British 'Dreadnought', responding the German's also began construction, there actually appears to be an armament race between the two nations as statistics show how spending on the military increased dramatically between the years. For example, Germany on her army alone in 1880 spent a total of 18.2 million (Britain 15m) then in 1914 the total had raised to 88.4 million, with the Germans spending four times as much as Britain. The Navy had also seen a significant boost in spending, which had increased from 2.4 million in 1880 (10.2m Britain) to 22.4 million in 1914 actual five fold increases with the British spending practically double that. Many European nations also desired Empire or at least the economic benefits of one. Between 1870 and 1914, much of Africa was colonised by the European community, the 'scramble for Africa' had began with the German Kaiser wanting his 'place in the sun' , German colonies which had led to several disputes one of which being over Morocco in 1906-11 between Germany and France. ...read more.

Previously it signed an alliance with Japan to guard against Russian expansionism and took pre-emptive action against such French measures. However, it reconciled it differences with France and then Russia. Germany possibly unconsciously had kept to the more traditional methods of using might to achieve their aims; expansion and Empire, building a fleet to challenge the British and the Schlieffen Plan to defeat France and Belgium. However, despite making this plan Zechlin justifies the action "Germany was ready to accept the risk of war, but had no desires to provoke it". With the 'concentric circles' of Joll which discuss the mix between personalities and the Marxist arguments of economics as the driving force. We may be able to contradict the view that Germany's warmongering caused the First World War through the Willy-Nicky telegrams (between Kaiser Wilhelm and Tsar Nicholas II) which are thoroughly friendly; with the "Need for peace...loving relationship". Or is this material only partly useful as it is on purely a peaceful front, written by two cousins - if the two were friendly was it economics which dragged Europe into war? Whatever, the national, economical or personal attributes if the Marxist views are accepted the blame lies on the power struggle between the imperialist powers and capitalist economics. "Was it a badly mismanaged Balkan crisis or long-standing rivalries that caused the First World War?" *********** Page 1 of 7 ...read more.