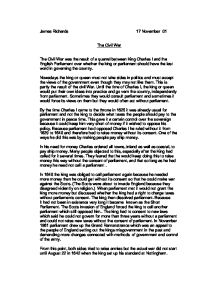 James Richards 17 November 01 The Civil War The Civil War was the result of a quarrel between King Charles I and the English Parliament over whether the king or parliament should have the last word in governing the country. Nowadays the king or queen must not take sides in politics and must accept the views of the government even though they may not like them. This is partly the result of the civil War. Until the time of Charles I, the king or queen would put their own ideas into practice and govern the country, independently from parliament. ...read more.

Because parliament had opposed Charles I he ruled without it from 1629 to 1640 and therefore had to raise money without its consent. One of the ways he did this was by making people pay ship money. In his need for money Charles ordered all towns, inland as well as coastal, to pay ship money. Many people objected to this, especially after the King had called for it several times. They feared that he would keep doing this to raise money this way without the consent of parliament, and that so long as he had money he need not call a parliament . ...read more.

The Scots invasion of England forced the king to call another parliament which still opposed him.. The king had to consent to new laws which said he could not govern for more than three years without a parliament and could not raise new taxes without the consent of parliament. In November 1961 parliament drew up the Grand Remonstrance which was an appeal to the people of England setting out the kings misgovernment in the past and demanding more changes connected with methods of government and control of the army. From this point, both sides tried to raise armies but the actual war did not start until August 22 in 1642 when the king set up his standard at Nottingham. ...read more.