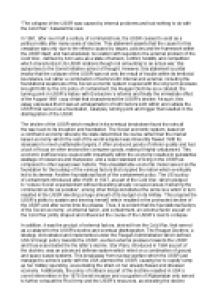 The collapse of the USSR was caused by internal problems and had nothing to do with the Cold War. Assess this view.

﻿?The collapse of the USSR was caused by internal problems and had nothing to do with the Cold War?. Assess this view. In 1991, after over half a century of communist rule, the USSR ceased to exist as a political entity after many years of decline. This statement asserts that the cause for this cessation was only due to the effects caused by issues, policies and the framework within the USSR itself, and had absolutely no relation with regards to the external problem of the Cold War - defined by Ann Lane as a state of tension, conflict, hostility and competition which characterized US-USSR relations though not amounting to an actual war; this subscribes to the Soviet Initiative school of thought. However, this statement is unfair insofar that the collapse of the USSR was not only the result of trouble within its territorial boundaries, but rather a combination of factors both internal and external, including the foundational weakness of the Soviet economic system coupled with the long term pressure brought forth by the US policy of containment, the Reagan Doctrine as a catalyst, the turning point in USSR?s history with Gorbachev?s reforms and finally the immediate effect of the August 1991 coup d?etat that characterized the USSR?s decline. ...read more.

In addition, it was the product of external factors, derived from the Cold War, that served as a catalyst for the USSR?s decline and eventual disintegration. The Reagan Doctrine, a strategy orchestrated and implemented under the Reagan Administration which defined USA?s foreign policy towards the USSR, exerted external pressure towards the USSR and thus exacerbated the the latter?s decline. Star Wars, introduced in 1984 as part of the doctrine, was an advanced defense system which relied on a combination of ground and space based systems. This breakaway from nuclear warfare which the USSR just managed to achieve parity with the USA alarmed the USSR, causing her to rapidly ramp up her military spending, exacerbating the strain on her already flawed and stressed economy. Additionally, the policy of rollback as part of the doctrine resulted in USA?s covert intervention in the 1979 Soviet invasion and occupation of Afghanistan only served to further exhaust the Red Army and the USSR?s resources, accelerating the decline of the Soviet Union. Thus, we can observe that the effort of the Reagan Doctrine which manifested as part of the Cold War would serve to catalyze the demise of the USSR, building upon the foundational weaknesses of ...read more.

In August 1991, the attempted coup d?etat by the hardliners met with resistance from the army and failed. This was significant as this was met with a huge outcry within the country, with massive protests throughout major cities within the USSR. This served as a clear indication that the the people overwhelmingly disapproved of the CPSU and their rule in the USSR, further chipping away whatever legitimacy they still had and spearheaded the independence of various Soviet socialist republics. As a result, we can distinctly observe that the failed 1991 coup served as a trigger, sparking off the result decades of factors both internal and external, causing the dissolution of the Soviet Union in 1991. In essence, we can see that the collapse of the USSR was not an implosion, caused only by the result of inefficiencies, policies, and struggles that manifested at home. Rather, it was the combined effort of factors originating within its borders coupled with pressures which found roots externally, that provided the foundation, that catalyzed, that altered its course and finally elicited the collapse of one of the most colossal superpowers of the 20th century. ...read more.

This essay points out most of the important factors in the USSR's downfall. There is a good balance between internal and external pressures. The main missing point is any reference to Eastern Europe- by 1948 the USSR controlled Eastern Europe and was exploiting its resources, but by the 1980s it was a political and economic liability (e.g. rising unrest in Poland).
But to get a really high grade the writer would need to weigh the argument in the question more. The US liked to claim that its hardline policies under Reagan had forced the USSR into an rams race it could neither afford financially or match technologically. Other historians would argue that the USSR knew it had to reform, and it was Gorbachev's attempts to do this that finally finished the USSR off. In nay case the final paragraph should develop this point rather more directly than it does, because that is what the question is asking.